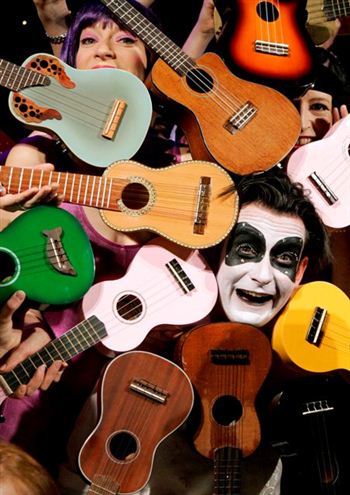 A REVIVAL of the ukulele was celebrated in Edinburgh today by miniature guitar lovers from across the world.

The traditional Hawaiian instrument has rocketed back to the top of the charts thanks to pop’s hottest new artists including Mumford and Sons, Laura Marling, and Noah and the Whale.

Its resurgence is reflected in this summer’s Edinburgh Fringe Festival programme, with a string of performers picking up their dainty instruments to entertain crowds through song and comedy.

Dozens of ukulele-playing festival acts came together to celebrate their love for the mini acoustic guitar, grinning wildly while strumming along to the tune of “You are my Sunshine.”

Helen Arney, 29, has been playing the instrument for just over a year and organised the get together after noticing a trend in the festival’s acts.

She said: “I definitely think the ukulele is making a comeback – at last year’s Fringe the ‘learn to play the ukulele in one hour’ show was sold out nearly every day.

“It really is that easy, it doesn’t take much to learn the basics, and then it’s up to the person to put as much practice in as they like.

“I used to play the piano, but with the ukulele I like the fact that there is nothing between you and the audience – it makes for quite an intimate atmosphere.

Ms Arney will rely heavily on her ukulele during her string of shows at Edinburgh’s Caves venue.

The one-woman show – Souls for Modern Loving – is a mixture of music and comedy-chatter, and sees Ms Arney on stage alone with her ukulele and a loop-pedal to add layers to her songs.

She said: “It is an instrument that can be used for comedy purposes too, I know the comedian Phil Kay is a keen player and often uses his in shows.

“I love that you can play with people you’ve never met before and you are all given an instant feeling of togetherness, the music we tend to play is up-beat and happy.

“It’s especially good to meet up with other like-minded musicians during the Fringe, because I have found performing on my own can get a bit lonely.

“As soon as I walked in and finally met all the other ukulele players I had been in contact with, I immediately thought ‘I’m not alone anymore.’”

Another festival-favourite supporting the comeback of the ukulele is small-instrument enthusiasts Tiger Lillies, who have been on the scene for 21 years.

Front man Martyn Jaques, 50, has been in the band since it originated, busking on streets before getting a break at the Fringe 15 years ago.

He said: “We play any small instruments but especially enjoy the sound that the ukulele gives.

“Our drummer uses a tiny drum kit which looks like it should belong to a child, but it suits us perfectly because we travel all over the world for gigs.

“I think it is fantastic to see so many acts on this year’s Fringe line-up picking up their ukuleles and including them in their shows.

“These instruments seem to be becoming quite fashionable nowadays – I remember when people associated them just with folk music, but they are being incorporated into all types of musical genres.”