By Amanda Keenan and Christine Lavelle

A MAJOR murder hunt is underway to catch a gang responsible for beating a Chinese delivery driver to death.

Dozens of police officers, forensic teams and hardened detectives flooded the Lochend area of Edinburgh to track down those responsible for the bloody attack on Simon San, 40, around 10pm in Lochend Avenue on Wednesday, just yards from the Loch Inn pub.

Vietnamese Mr San worked for the Yong Hua Garden takeaway which locals claimed had been under siege from youths for months.

According to police he died from brain injuries after being pounced upon by three teenagers from a larger gang of males and females.

There were emotional scenes eariler when Mr San’s sister Shirley arrived at the shop to find the area surrounded by police.

She was clearly distressed as police ushered her into the shop, where she broke down in tears before leaving a sign on the door reading: “Shop is closed today.”

Mr San, who cared for his two elderly parents in Glenallan Drive, was discovered lying on the road dying by a barmaid from the pub.

She called for an ambulance which sped him to the Royal Infirmary of Edinburgh for emergency treatment, but he died soon after.

The barmaid was left traumatised by what she witnessed according to Loch Inn owner Peter Swanson. 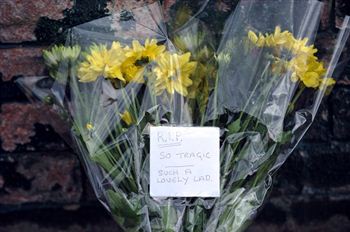 He said the takeaway has been subject to grief from local youths for the eight months it has been open.

He said: “This isn’t a bad area at all except for a few rats who tend to hang around outside the takeaway.

“They often throw empty cans at the shop and have been bothering them for a long time.

“My bar maid who was working at the time said that night the youths had been sitting on Mr San’s car and shaking it.

“She thinks he was attacked when he went out to try and stop them.”

Jackie Lock, manages The Loch Inn but was not working at the time.

She paid tribute to Mr San and said: “He was a lovely person, very friendly, he was always smiling and said hello.”

Floral tributes were left at the scene yesterday with one card reading: “So tragic. Such a lovely lad.”

A fleet of police squad cars immediately sealed off the area with blue and white crime scene tape and began canvassing witnesses and neighbours for statements.

Meanwhile forensic teams started the painstaking process of gathering crucial shards of evidence while others tried to source any CCTV footage that could help them nail suspects to the scene.

Neighbours at the home Mr San shared with his parents described him as a quiet, likeable man who worked hard to look after them.

“Why would anybody want to harm such a lovely young man.

“He was always very polite, always nodded or said hello.

“His family will be overcome.”

Another added: “It’s such a shame, he was such a likeable boy.

“He looked after his parents.

“He wasn’t much of a talker but always nodded if he saw you or said hello.

“He worked most nights as a delivery driver.

“He seemed a really sensible young man, not a trouble maker, not like some of the foul mouthed folk you get about these days.

“I know he has two sisters who don’t live at home, but I saw them come back earlier today with their parents and never thought anything of it.

“It’s such a sad thing to hear. I just don’t know how they will cope.”

The owner of another local business – who asked not to be named – said gang trouble was rife in the area.

He said: “The gangs round here are getting worse, it’s gotten bad so we’re worried to open up some nights let alone let our drivers go out alone.

“One of the drivers told me that this lad was just attacked by a big gang of youths outside the Chinese takeaway, and although he didn’t see it, he said there was a real bloody mess afterwards.

“The police have been flying about everywhere.

“They have to find whoever did this.”

Detective Chief Inspector Gareth Blair said: “This was an unprovoked attack that has resulted in the tragic death of a man who was simply going about his daily business as normal, and we are making an urgent appeal for witnesses to help us trace those responsible.

“Anyone who was in the area of Lochend Avenue last night, who either witnessed the assault or noticed a group of youths close to the Loch Inn Pub, should contact police as a matter of urgency.

“Similarly, anyone who saw the youths making off from the scene in the moments after the assault should also get in touch.”