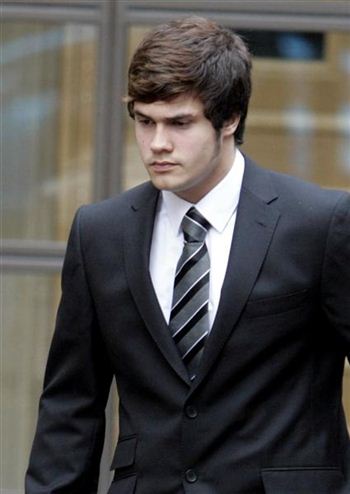 Jonathan Wright, 18, whose family home is in Aberdeen, told officers that he had downloaded the sick pictures to “see if they were real”.

At Edinburgh Sheriff Court today he pleaded guilty to possession of the images between August 26 and November 17 last year.

Most of the pictures were of young girls aged between 10 and 13.

But at least one was of a man having sex with a child thought to be just a few years old.

A not guilty plea to taking and distributing the images was accepted by the Crown.

Sheriff Alistair Noble heard that police had received a tip off that Wright had the paedophilic snaps and visited his parents in Aberdeen before being re-directed to halls of residence at Edinburgh University.

The court heard: “A laptop was found and the accused confirmed it was his laptop.

“He initially didn’t state there were any images on it.

“It was removed for forensic examination and the forensic investigations found 1,005 indecent images and 46 moving images on his laptop.”

Wright was then taken in for questioning by police and revealed he had got a “thrill” out of doing something “dangerous”.

The court heard: “He said he had downloaded the images because he was curious to see if they were real.

“He confirmed that he had done this on a number of occasions. He stated between 10 and 20 times.

“He claimed he got a thrill obtaining the images not because he got a sexual thrill but because he was doing something dangerous.

“He had used search terms on search engines specifically to find indecent images of children.”

Of the 1,005 images, most were on the lowest level used by cops to determine the severity of paedophilic content.

But the schoolboy had six on the highest level and 10 on level four.

They included pictures showing underage girls tied up and other young girls having sex with male adults.

Wright was placed on the sex offenders register today but sentencing until next month for reports and the defence mitigation was reserved until then.

The court was not told what he was studying while at the halls of residence which police had as his registered address.