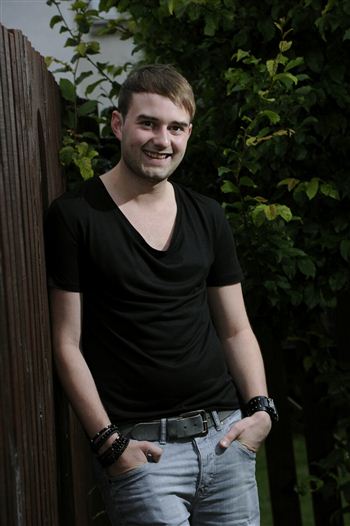 A CAREERS advisor from Edinburgh could be headed for stardom after making it into this year’s X Factor final.

Mark McGregor, 21, received four yes’s from the celebrity panel of judges: Simon Cowell, Louis Walsh, Cheryl Cole, and guest Geri Halliwell, who stood in for Dannii Minogue during the latter part of her pregnancy.

The Scots singer was told by the show’s boss Simon Cowell that it was singers like him that kept them coming back to audition in Scotland.

Mark, who lives in Niddrie, is a personal careers coach at Action4Employment in Tollcross, and said he has received nothing but support from friends and family since revealing he made it to the final stages of the competition.

He said: “I’ve been singing since before I went to school, so everybody knew that it was something I loved.

“I’ve had hundreds of texts, emails and Facebook messages from people saying they were pleased I’d made it.”

But – it could have been hit or miss for the budding popstar – as Simon Cowell advised him to change his audition song at the last minute.

Mark said: “I was going to sing Rewind by Paolo Nutini but Simon Cowell said it was too predictable, so I went with R Kelly’s If I Could Turn Back the Hands of Time and the judges loved it.

“Geri Halliwell said I had a lot of passion in my voice, while Cheryl Cole said I had a good tone and she liked my style.

Before the competition, Mark’s only real claim to fame was competing in  a karaoke contest with Edinburgh’s other reality television singing songstress, Jenny Douglas, who made it into the finals of Over the Rainbow.

However, he is the only member of his family to be bitten by the singing-bug, as his dad, also named Mark, 41, works on the railways, and mum Julie, 41, is re-training to work in social services.

Mark was quick to praise 34-year-old Lee Gardner, another Edinburgh born star who made it through the brutal audition stages.

Calling himself Storm Lee, the singer has shared a stage with Meat Loaf and Ozzy Osbourne and sings on the American game show The Singing Bee.

Mark said: “He was a really nice guy but he’s quite a bit older than me so he was competing in a different category so there wasn’t any rivalry.

“I can confirm that he made it through to boot camp but I’m not allowed to tell you whether he got any further.”

Mark could be set to follow in the footsteps of X Factor 2007 winner Leon Jackson, from Livingston.

The singer won the show when he was just 18 and went on to top the singles chart with When You Believe.