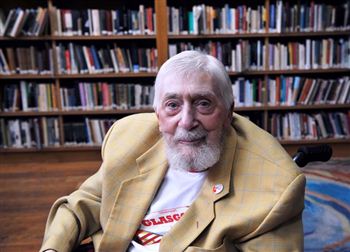 SCOTLAND’S literary giants have led the tributes to the nation’s Poet Laureate Edwin Morgan, who passed away this morning aged 90.

The Glasgow-born writer was widely regarded worldwide as one of the most progressive poets of modern times, described in tributes today as “a gentle genius.”

Although he was ill for some time before his death, Morgan’s energetic work continued from his care home, with his most recent collection published earlier this year to celebrate his birthday.

Fellow writers, musicians and politicians spoke fondly of Morgan, who was awarded an OBE in 1982 and won the Queen’s Gold Medal for Poetry in 2000.

Banks and other Scottish writers often visited Morgan at his West End nursing home during what would be his final years.

He said: “It’s very sad although we did know he was ill for a long time and to reach the age of 90 should be celebrated.

“As a person he was such a deeply lovely man who didn’t follow the sort of snobby scene you might associate with his type of greatness.

“And as an artist I hold his work very close to my heart too because he embraced everything from science fiction to the actual physical performance of poetry.

“He broke down the boundaries of all these genres to create work that could make you literally laugh or cry.

“I will sorely miss him but the last thing to be doing is be downcast about it when he has left us so much to celebrate.”

Carol Ann Duffy, the current poet laureate, said Morgan was “poetry’s true son” and could never be matched for imagination and creativity.

She said: “A great, generous, gentle genius has gone.

“He is quite simply irreplaceable.

“I’m certain that everyone who performs or attends at the Edinburgh international book festival will be thinking of him with love and gratitude.”

As well as publishing over 60 books in his career, Morgan’s multi-lingual talent was highly sought by publishers seeking translations of foreign poetry.

His death was publically announced by the Scottish Poetry Library, whose tribute touched on the cosmic theme of some of Morgan’s work.

Director Robyn Marsack said: “A star goes on giving light long afterwards, as he will.

“Edwin Morgan was not only our national poet – widely read, studied at school, much loved by fellow authors as well as readers – but our international poet: a marvellous translator from many languages and, equally, translated into many languages.

“He was a star of the international concrete poetry movement of the 1960s.

“His inventiveness is matched by his accessibility, a rare combination of formal skills, intellectual curiosity and emotional power.”

“His voice brought language to life”

In 2002 Morgan collaborated with Scottish rock band Idlewild, reading verses over Scottish Fiction, the closing song of the band’s The Remote Part album.

Singer Roddy Woomble previously told of his love for Morgan’s work, which he began reading aged 15.

He said: “It wasn’t until I saw Edwin read his words aloud that I realised how much his voice brought the language to life, gave it emphasis and made you understand both the poetry and poet even more.

“It paralleled my thoughts about music giving words a new meaning and emphasis in a totally different way.”

Morgan was picked to write Poem for the Opening of the Scottish Parliament in 1999 – a moment First Minister Alex Salmond said would stay with him.

He said: “Edwin Morgan was truly a great man, an exceptional poet, an inspiration and a most fitting choice as the Scotland’s first National Poet.

“Much-loved in Scotland and indeed around the world, his work tackled all manner of global issues and major historical events closer to home.

“His passion for observing all aspects of Scottish life shone a spotlight on Scotland for the rest of the world.

“I vividly recall the poem he wrote for the Opening of the Scottish Parliament, when he wrote ‘Don’t let your work and hope be other than great’.

“That epithet must surely apply to Edwin Morgan himself.

“Our thoughts are with his family and friends at this sad time, but his legacy of great work will endure and ensure his name lives on.”

The parliament poem was also a highlight for Scottish Labour leader Iain Gray.

The MSP said: “Edwin Morgan OBE was widely recognised as one of the foremost and best loved poets of the 20th century, the last of a great generation of Scottish poets.

“It is perhaps fitting and appropriate to reflect upon the closing lines of this poem For the Opening of the Scottish Parliament as an expression of the view expressed by his fellow poet Liz Lochhead : ‘There is nothing he couldn’t make a poem out of.’”