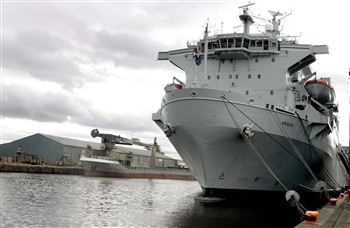 ONE of the Royal Navy Fleet’s most important ‘floating hospital’ ships has docked in Scotland’s capital, allowing its crew to soak up the festival atmosphere.

Royal Fleet Auxiliary Argus – fondly nicknamed ‘BUPA Baghdad’ – acts as an accident and emergency unit for troops deployed to conflict zones all over the world.

But – the 28,000 tonne vessel is distinctly different from traditional red and white hospital ships – it carries arms and deploys troops and aircraft.

The ship sailed into Imperial Docks at Leith, Edinburgh on Monday 16 August, as part of an 11 day stay. 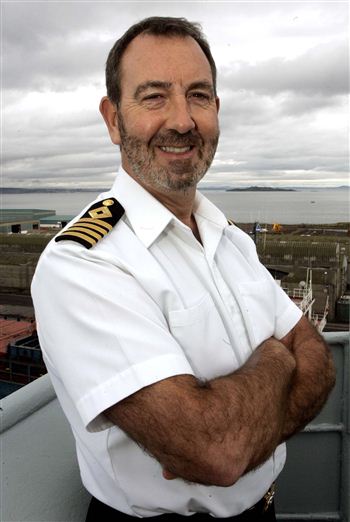 Captain Ian Johnson has been with the ship for just three weeks, and is gearing up to take command of the 130-strong crew.

He said: “This is a routine stop, which will allow us to transition into our recently finished refit.

“This is the first time I’ve been to Edinburgh, and I think the crew’s highlight so far has been catching performances by the Royal Military Tattoo.

“They did some research before we docked here and they’ve all been very impressed – I think they’re enjoying having the odd beer or two as well.”

Patients are brought by helicopters, which land on the ship’s deck, and are taken to awaiting surgeons to be treated in a hospital-like environment.

The ship has undergone a £37 million safety conversion, which redefines its primary role from Aviation Training Facility to Primary Casualty Receiving Facility.

The Argus now has 100 beds, four operating theatres, an intensive care unit and is one of the only vessels in the world to carry a CT scanner.

In fact – the only difference between the hospital station and that of an on-land A&E is that everything is tied down to prevent movement. 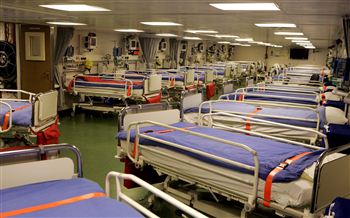 And along with medical care equipment, the 175-metre-long ship’s Royal Navy personnel have 250 nurses, doctors, and medical assistants on hand to take care of them.

Doctor Mark Robinson oversees all of the medical staff aboard the Argus, and said the facilities it carries are second to none.

He said: “I’m here for anyone seeking medical attention whether we are out at sea or not – people still get sick or pick up coughs and colds.

“The ship has been given the nickname ‘BUPA Baghdad’ because a lot of people like to joke that the service is so good it’s almost like receiving private health care.

“When the casualties are brought in it is very strange how quiet the emergency area goes, surgeons and nurses will be alerted and waiting, and then everyone just gets to work – it’s nothing like what you see on television.”