A FRINGE festival comedienne has booked out a restaurant in Edinburgh on Sunday night, in her quest to find a ‘quality’ one-night-stand.

Gemma Goggin, 30, star of show Get Laid or Die Trying, has been telling her sell-out audiences about the trials and tribulations of finding sex as a single girl.

She will take over Mexican restaurant Illegal Jacks on the city’s Lothian Road, using it as a venue for speed-dating.

Gemma said: “Illegal Jacks was getting a lot of buzz on Twitter for having good meat, so I want to see if that applies to the guys as well as the food, so I contacted them and asked if I could take over the venue for a few hours to host some speed dating.

“Of course, while it might lead to a quality one-night stand, I’m just hoping there’s no post-coital Mexican food burp.”

Jack Grills, chef at Illegal Jacks, said: “Gemma got in touch and it touched my heart – my heart I said – to see a lady in need, so she’s more than welcome to use here for a speed date.

“Anything else though, and she can get a hotel room.” 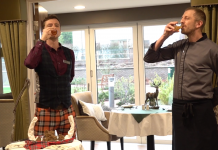