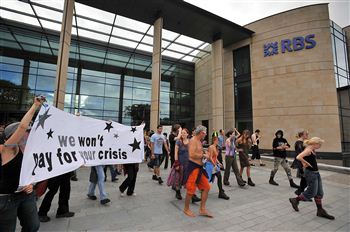 Some of the 1,000 activists camped outside the RBS headquarters in Gogarburn are reportedly planning more disruptive action after last week’s attempt to storm the building.

And now bank bosses have told workers to consider alternative options to guarantee their safety.

A spokesman for RBS said: “Our priority is to ensure we minimise disruption for staff and customers.

“As you would expect, we have taken a number of precautionary measures to that end, including providing alternative work locations for some staff where appropriate.”

The news follows several days of disruptive protest at the site, where around 150 climate activists pitched up on Thursday to draw attention to the bank’s financing of fossil fuel projects.

Police have so far made several arrests, including one female protestor who superglued herself to the reception desk of the bank’s main building.

Climate protestors also hosted a “demonstration disco” outside the RBS headquarters on Friday as security looked on helplessly and activist numbers swelled to around 400.

The demonstrators are accusing RBS of damaging ecosystems and endangering communities by investing in fossil fuel projects.

The bank’s headquarters is planned to remain open today – the day before RBS chief executive Stephen Hester is expected to argue in favour of greater leniency for Britain’s beleaguered banks.

Mr Hester is due to deliver the address at Glasgow University on Tuesday, and will warn G20 governments that banking reforms must be taken with care so as to not risk economic recovery.