Climate Camp activists arrested in day of protests across Edinburgh

CLIMATE change activists were accused of being “reckless” after launching a wave of protests against the Royal Bank of Scotland today (mon).

Hundreds of protestors from across the UK gathered in Edinburgh to target bank buildings across the city.

But the Climate Camp group were blamed for potentially putting lives at risk when a busy road was coated in what was thought to be vegetable oil. 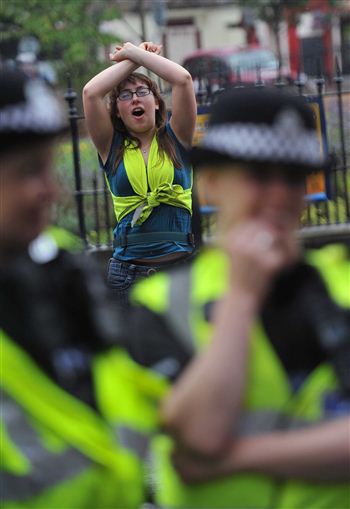 And they were also accused of earlier wielding hammers and firing missiles at police in the build up to today’s tense stand-off.

Speaking at RBS HQ police superintendent Lesley Clark said police strategy towards protesters changed after her officers were subjected to claimed violence on Sunday which left several windows at the HQ smashed.

She said: “A group of protesters were throwing missiles and some were wielding hammers.

“This means that we are now dealing with anti social behaviour rather than peaceful protest, and we will respond appropriately.

“There seems to be an element who are determined to wreak havoc, we will be working to protect the public and maintain order.

“We have drafted in officers from most Scottish forced and there is a substantial police presence on site.”

However protestors said they had remained peaceful throughout and denied the claims.

Kevin Smith from the Climate Camp Group said: “Some people pushed past the police to get access to the site – but I didn’t see missiles or hammers used.”

The fact remained, however, that in a day which saw rooftop protests, buildings hit with graffiti, roads blocked, people chaining themselves to doors and others Superglued together, at least eight arrests were made.

By mid-afternoon, 12 protestors in all had been detained in a police operation which began when the first of around 500 protestors first struck camp on Friday.

And shortly before 2pm Police in full riot gear including helmets with visors gathered on site, sending a clear statement of their planned response.

Officers were also seen filming and photographing campaigners from the ground and from the roof of the building.

Hundreds of tents remained pitched at the grounds of RBS HQ at Gogarburn near Edinburgh Airport.

A police Command Unit and Support Unit parked strategically on the iconic RBS, officers wearing high visibility vests watching proceedings from above as traffic crawled its way towards the city below. 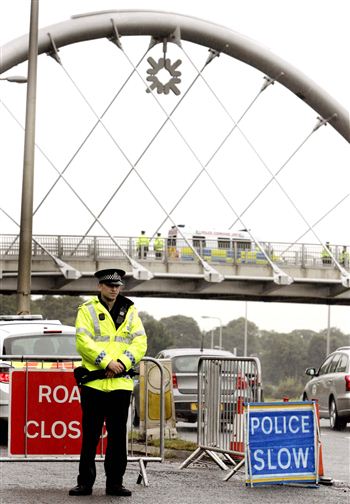 On the westbound carriageway a police patrol car was park across the slip road leading to a route running alongside the grounds, it’s flashing lights warning any drivers that attempting to go down that way would be denied.

Even early morning cyclists were turned away, but not before being ordered to dismount to have their rucksacks checked and details taken.

The same was true of young men who happened to choose a nearby path as their route towards work.

Peering through the trees, some 15 or so police ‘riot’ vans could be seen parked in front of the main boulevard, officers in protective fatigues penned inside.

To the rear of the building was the Climate Camp itself, activists sodden by the driving rain, but still beating their drums of protest.

Police estimated numbers at the camp had swollen to around 500 since it first broke cover on Friday.

Within nearby South Gyle, protestors stormed a second giant RBS office, this time the Drummond Building.

Lothian and Borders Police confirmed that seven activists had managed to superglue themselves together on site. 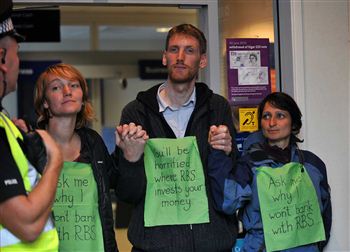 It prevented access to the executive car park at the imposing building used as the bank’s main administrative offices.

They were eventually freed and moved on.

Police later branded protestors “reckless” after activists were blamed for pouring what was thought to be vegetable oil across the A720 road at Bankhead and the A8 westbound before City of Edinburgh Council cleansing teams cleared it away.

A police spokesman said: “This is an extremely reckless and dangerous act which could put many members of the public at risk.

“It is a worrying trend and disturbing escalation in the activities of the protesters.

“While the Force facilitates peaceful protest, public disorder, damage to property or any other criminal acts will not be tolerated.

“It is obvious that the activists have change their emphasis and we have considerable resources in place to respond in a proportionate and responsible manner.

“A significant amount of planning had been put in place for the Climate Camp so that the Force was prepared for every eventuality and additional resources were sent to the RBS site today to support the policing operation there.”

In the city centre at Clydesdale Plaza on Lothian Road which houses oil firm Cairn Energy, RBS and others, a group of activists dressed in black delivered a giant pink RBS piggy bank.

At around 9am two activists arrived at the Clydesdale Bank Plaza on Lothian Road, dressed head-to-toe in black.

They brought at large piggy bank with an RBS logo and threw dark treacle-like gloop over it – symbolising oil – the remains of which was left seeping into the puddles on the street at the bottom of the steps.

It was thought they were protesting about RBS funding of Cairn’s investigations into drilling for oil in Greenland thought to be worth loans of more than £100m.

A security guard said: “They left as quickly as they came, making their gesture and disappearing again.

“We checked the CCTV afterward but of course they were blacked out so we couldn’t make out their faces.

“We were expecting more trouble but they just did what they came to do and left again.”

On Nicolson Street close to the Festival Theatre, an RBS branch found itself at the mercy of a five strong dance troupe with luminous vests tied round their chests gave a woeful X-Factor style rendition of ‘Lady Gaga in front of bemused counter staff.

Others outside halted traffic by dancing on the road in the rain as they murdered Lady Gaga’s number one hit Poker Face with their alternative version while the branch closed temporarily. 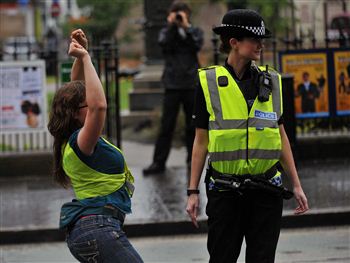 Hannah, a protester from London, said: “Bank of Scotland is 84 per cent owned by the taxpayer.

“We are funding these destructive projects and it is really endangering the health and communities of indigenous people.

“It is not about blaming individual customers but about opening up discussion.

“It is great just to start talking about it.

“We hope that when people get home they will start thinking about it.”

Protesters had written songs for the occasion, which they performed and danced to – some of whom made their way to the traffic island in the middle of the road – to the frustration of passing drivers who beeped their horns at the display.

The group’s lyrics were written to the music of recent pop songs such as Lady Gaga’s Poker Face – renamed ‘Dirty Oil’ – and Gloria Gaynor’s I Will Survive.

Rewritten lyrics included ‘It’s getting hot, the planet’s getting shot, you can’t deny it at all, it’s dirty oil,’ and ‘Turn around now, this bank ain’t welcome anymore – weren’t they the ones trying to hurt us with tar sands.’ 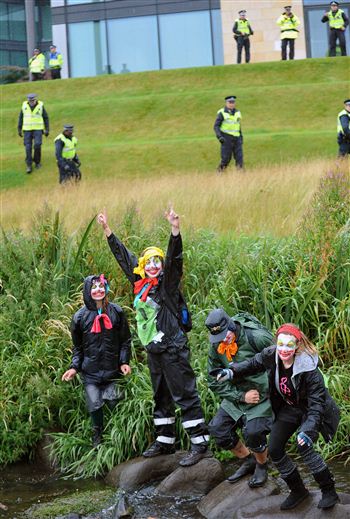 Peter, from London, was playing guitar and said: “It is a lovely combination of civil debate added to joyous music to make the idea of change possible.

“Some people don’t like their day to be disturbed but other people are happy and are taking a leaflet.”

Anna, a protester from London, said: “We just want to raise awareness and encourage people not to bank with RBS and Natwest and just show people that there is another alternative.

“It has been quite positive especially because we are making music.”

At one point the doors to the branch opened to let staff inside, and members of the group crowded round shouting “Do you have any song requests?”

Many RBS customers appeared frustrated at not being able to use their bank.

One angry customer said: “I’m using more fuel because I have to come back to the bank another day. Another complained that the protesters were causing more hassle to them than to the bank.

However, other passers-by danced along to the music and beeped their car horns in support. 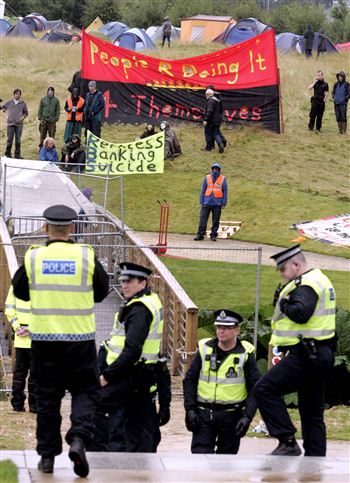 George Hately, 73, from Mount Castle, Edinburgh, said: “There is more than one issue in this.

“I feel that they are doing it the wrong way.

“They are talking about waste this and waste that but there are umpteen police here and there are never any down my way.”

Another onlooker said: “I think it’s wonderful what they are doing.

“It is terrible that this is happening in Canada.”

In Leith towards the north of the city, five activists broke from the main group to target the Forth Energy HQ in protest at its biomass business.

Another pair more stood guard with a banner and chained themselves across aa main door, while another five wellied protestors unveiled signs on the opposite side of the water reading ‘Health Hazard Biomass’ with a skull and crossbones image.

A small number of police watched on nearby, speaking with some of those involved before moving in to arrest them.

The Edinburgh Book Festival, sponsored by RBS, also fund itself disrupted when a talk by Nobel prize winning economist Joseph Stiglitz was interrupted.

Stiglitz has been a noted critic of modern banking and globalisation in particular, leaving organisers bemused as to why he was targeted.