HUNDREDS of climate change protesters clashed with police after a tense stand-off at the Royal Bank of Scotland headquarters in Edinburgh descended into sporadic violence tonight (mon). 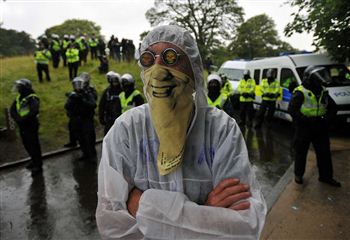 Dozens of officers dressed in full riot gear formed a human shield around the £335 million complex at Gogarburn to face down eco activists from Climate Camp.

Shortly before 6pm pockets of protestors began throwing missiles and using catapult to fire objects onto the police front line.

Much of the arsenal appeared to include nothing more than water balloons filled with brown sticky liquid and cans of Silly String.

But chillingly, officers also seized heavy mesh hammers, tools and a coal chisel from members of the group who had earlier wreaked havoc on Edinburgh.

After a three hour stand-off with police at Gogarburn, a small group of protesters ran down to the forefront, where a makeshift barricade had been put up, cutting down branches of trees to ease their way.

Loud booms could be heard as the brown balloons hit off office windows, before spilling out their brown liquids.

Heavily armoured police brought out shields to stop the missiles hitting their targets.

One van was rammed by a home-made Rhinoceros head attached to a wooden post. 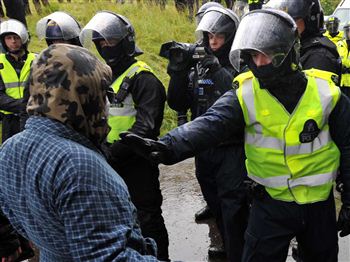 Another small group stayed close to the barricaded bridge, while the larger core of the camp seemed to be rallying together.

Police continued to stay in their front line formations, guarding areas around trees for any break away protesters.

Mounted police were also on hand, as they prepared for all eventualities.

But while the atmosphere was tense, the skirmishes appeared limited.

Crowds could be heard chanting as they tried to move their homemade tower to the space right across from the police presence.

However, as the rain poured down the moving mission proved difficult and slow progress was being made.

The climate campers moved a wooden platform which they built themselves around the site in an attempt to get it close to the RBS building.

The structure was initially used as a stage for performance, but was later converted into a makeshift siege tower.

Campers moved the tower with their bare hands while receiving orders and encouragement from a protester with a loudhailer on top of the tower.

By early afternoon police said 12 arrests had been made, bringing the total since Friday to 16. 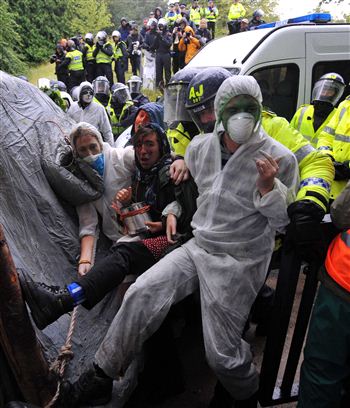 At Nicolson Street, a 25-year-old man and two women aged 38 and 34 were arrested and charged with breach of the peace.

Five others were arrested and charged with breach of the peace for laying siege to a property at Forth Ports. They included two men aged 20 and 49, and three women aged 23, 41 and 18.

Another man, aged 58, was arrested and charged with assault in relation to an incident on Gogarburn Bridge.

A 24-year-old woman was arrested and charged with vandalism in the city’s Hunter Square and two men aged 31 and 33 were charged with breach of the peace in relation to an incident on Glasgow Road, Edinburgh, near the RBS HQ.

Most of those arrested are expected to be released on an undertaking to appear at court at a later date.

A spokesperson for Lothian and Borders Police said: “While the Force facilitates peaceful protest, public disorder, damage to property, or any other criminal acts will not be tolerated.

“It is obvious that the activists changed their emphasis, and we had considerable resources in place to respond in a proportionate and responsible manner. 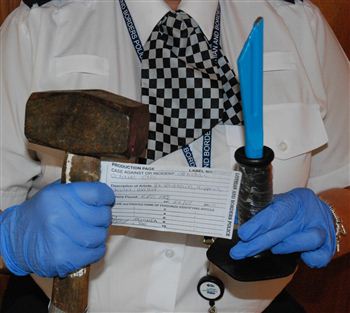 “A significant amount of planning had been put in place for the Climate Camp so that the Force was prepared for every eventuality, and additional resources were sent to the RBS site today to support the policing operation there.

“As is common practice in such operations, the assistance of neighbouring Forces was sought. We have in the past collaborated with Forces such as Strathclyde, Central Scotland Police and Northumbria on large scale events.”

By 7pm only a small group of activists were still in the area, the rest having melted away amid the evening rain.

Police maintained a tight cordon around the building keeping a watchful eye on those still at the campsite eating their evening meals.

Richard Bernard,26, from Climate Camp said: “We have laid siege to RBS today with a siege tower on one side and a molasses catapult on the other.

“It’s been a fun afternoon, but on a serious note we have managed to close down the RBS headquarters for the day.”

Some 3300 staff normally work at the site which includes a nursery, but many were told to stay at home or work from different offices because of the protests.

An RBS spokesman said: “Our main concern has been the safety of our workers so we have only minimum staffing levels in place at Gogarburn today. The children’s nursery is closed for the same reason. The impact of this on our customers and operations is negligible to nil as we have a full contingency plan in place.”

Local communities to pay for own speed guns