Thug who claimed he didn’t know he had knife jailed 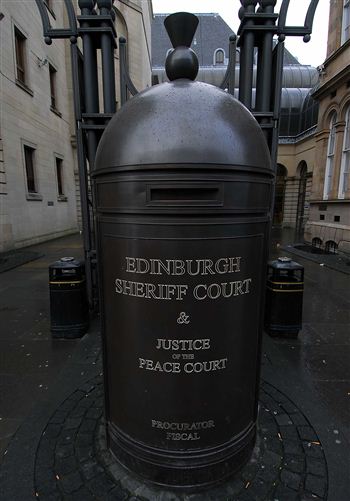 A THUG who claimed he didn’t realise he had a knife in his pocket has been jailed after being caught with a blade for the SEVENTH time.

Jon James Wood, 31, was jailed for 16 months by Sheriff Kenneth Maciver at Edinburgh Sheriff Court today after pleading guilty to the charge.

The court heard how Wood had been stopped and searched by police on Princes Street in Edinburgh on June 4 this year.

The officers found a lock knife with a two inch blade inside his jacket pocket, and arrested and charged him.

His lawyer Jim Wardlaw said that Wood had grabbed his jacket from the back of a chair at his girlfriend’s house and put it on without realising that the knife was in the pocket.

Mr Wardlaw told the court: “With regard to him carrying a knife, my client had been staying with his girlfriend for a time.

“His jacket was draped over the back of a chair and he grabbed it on his way out without realising that the knife was in the pocket.

“My client previously had a serious drug problem and he would be forced to commit robberies and burglaries to feed his habit.

“Following the successful completion of a Drug Treatment order he is now free of drugs.

“He did not come into contact with the police at all for the duration of the treatment order between August 2008 and February of this year.”

Mr Wardlaw added that Wood had achieved a degree of stability in his life with the support of the authorities and was now drug free.

But Sheriff Maciver said there was no choice but the jail him, given the number of previous convictions he has.

Sheriff Maciver said: “It seems that Mr Wood is seldom seen without a blade.

“The accused also has previous convictions for assault and robbery.

“I note that this is in fact your seventh conviction for possession of a knife, I am amazed that you have not got the lesson.

“Increasing sentences for this have not addressed the issue.

“In this case there has to be a deterrent sentence, and I would have sentenced you to the maximum two years if you had not plead guilty.”