Halfway House pub in financial worry after rise in rates 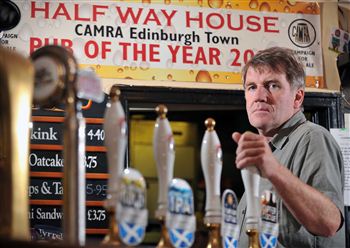 THE OWNER of Edinburgh’s Pub of the Year says he could be forced to shut up shop because it is in danger of sinking into bankruptcy following a massive increase in its business rates.

The Halfway House – the smallest pub in Edinburgh – was named pub of the year 2009/2010 by the Campaign for Real Ale helping tourists flock to the tiny bar on Fleshmarket Close.

But owner Steve Whiting, 55, who says he ploughed in his life savings to take it over just last year, had been left reeling after the annual bill quadrupled, from £2000 to £8000 after a controversial review of rates.

Assessors more than doubled its rateable value ruling that the pub – which can seats just 24 people – no longer qualified as ‘small business’ and was no longer entitled to a 50 per cent discount.

Mr Whiting, from Glenfarg in Perth, took over the pub in April 2009 with wife Barbara, and said the revelation is “incredibly disappointing.”

He said: “One year into the business and we’re hit with this.

“I’d like to sit down with one of the people who decided this and say – ‘What if it was your home? Would you still think it was fair then?’ – Obviously the only answer to that is no.

“For me the whole thing is colossally disappointing, to have our rates quadrupled in one go without as much as a warning from the council.

“Survival is going to be tough; I just hope my wife and I can ride out the storm.” 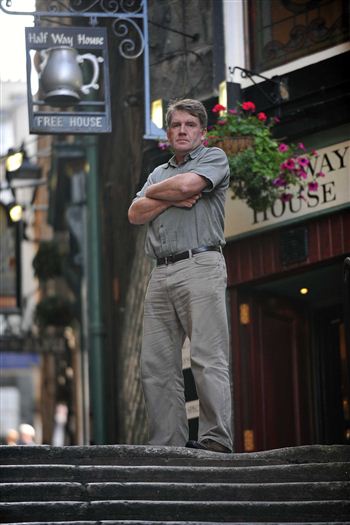 The landlord has already had to lay off a barmaid, taking on an extra 15 hours a week himself to soften the blow to business.

But – Mr Whiting said – he hopes he can manage without letting anymore staff go.

He said: “I’m going to do my best to make sure it doesn’t come to that.

“The main way it is going to affect me is that I am working much more hours than I had originally planned.”

“The pub won’t be shut down in the first instance – but it is putting tremendous financial pressure on us.”

Mr Whiting said he had wanted to get his hands on the Halfway house for years, and after selling up his Perthshire hotel to raise the capitol, he took out a huge loan and sank his life savings into it.

He has now lodged an appeal against the rate-able value placed on the pub with the Lothian Valuation Joint Board – and will likely have to wait until the end of the year for a decision.

The pub’s last quarterly turnover was down almost 14 per cent on the same period last year, which the pub boss puts down to the recession and cheap alcohol deals in supermarkets.

He said: “Trading is tough and then this happens – it’s a punch in the stomach.

“The whole thing just seems so high-handed and we feel like an easy target.”

The new rates bills were enforced in April this year and more than 2000 appeals have already been lodged in the capital.

The valuations were based on estimations made by assessors in 2008, and business leaders expect around 40 per cent of firms will have put in an appeal by the time the appeals-window closes in September.

A Scottish Government spokesman said almost 60 per cent of businesses in Scotland now pay less or no more in business rates as a result of revaluation, with average savings of more than £1300.

He said: “A robust appeals process is open to all wishing to appeal their valuation.”

Lothian Valuation Joint Board said it would be “inappropriate” to comment while an appeal was pending.

Rankin get his hands-on first novel