A CHURCH congregation which raised more than £16,000 in a heartfelt tribute to remember its former Minister unveiled a memorial window to him at a special service on Sunday.

John Carrie, 64, who was minister of Queensferry Parish Church for 37 years, passed away suddenly in March 2008 just months before he was due to retire. 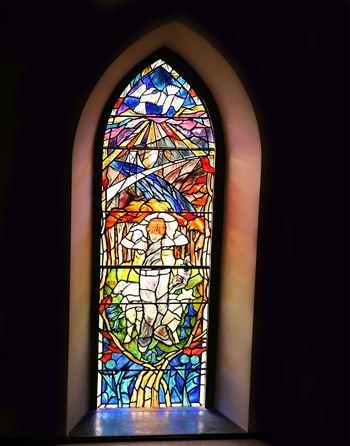 Following Mr Carrie’s death, a memorial appeal fund was set up by the congregation which raised over £16,000 towards a stain glass window to be specially commissioned in his memory.

It was designed by artist Roland Mitton and based on Psalm 23, “The Lord’s My Shepherd” and unveiled by his widow Anne in front of a packed congregation.

The fund raising efforts not only paid for the window, but also funded the training of a school teacher in Chogoria, Kenya – reflecting Mr Carrie’s interest in the needs of the Third World.

It is anticipated a further two teachers will be trained with the remaining balance.

”John’s untimely passing came as a great shock to everyone. He was a thoroughly decent man.

“It was a privilege to have known him and to have been there to support the congregation through a very difficult period.

“This window is our tribute to a very special man.

He added: “Sunday was a very moving occasion and both the congregation and John’s family are thrilled with the window.”

A chemistry graduate of Trinity College, he also helped set up the annual Forth Road Bridge Cross which raised cash for Christian Aid.

Tips for Forming a Church