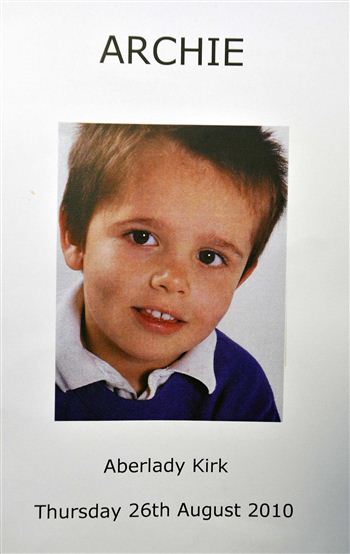 A BOY knocked down and killed by a delivery truck just yards from his home days before he was due to start school was laid to rest to the soundtrack of a favourite Harry Potter film today.

Archie Dunbar, five, died tragically on Tuesday last week after being hit by a delivery van while cycling his brilliant red bike just metres from his home in Gullane.

This morning emotional mourners paid tribute to the popular “free spirit” by showing up in their droves at Aberlady Parish Church in East Lothian.

Mum Michaela wore a black hat which covered most of her face, dad Jonathan wore jeans as the ceremony was deemed to be a celebration of his young life, with those attending encouraged to cherish their memories of him.

Older brother Fionnlaugh stood bravely at the front of the packed service and told the assembled mourners he hoped every one of them would live their lives as fully as Archie.

The funeral began with the soundtrack playing from Harry Potter and the Order of the Phoenix, reminding all of Archie’s tender years.

Reverend Christine Clark then led the congregation in singing two hymns – All Things Bright and Beautiful and One More Step Along the World I Go before reflecting on stories from Archie’s short but full life. 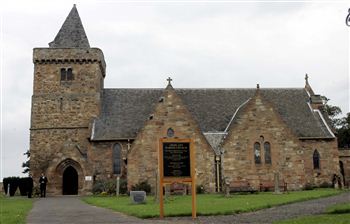 She spoke of his love for the outdoors and walking on the beach bare foot, and how he “always saved space for dessert”.

In the hours after the accident Archie’s parents recalled how their boy “had died doing what he loved most” – playing on his bike.

This was the first summer he had been confident enough to go out without his trusty stabilisers.

Fionnlaugh said his brother was “kind and caring”, leading the Reverend to read out the story of The Good Samaritan.

Big sister Skye sat close to her parents throughout the service.

Floral tributes and stacks of toys had been left at the spot where he died on Muirfield Drive.

It was revealed the toys will now be given to the Royal Hospital for Sick Children in Edinburgh as a gift in memory of Archie, along with a collection of money taken at the service.

One onlooker commented on how much Archie looked like his dad, and others were overcome with grief while Reverend Clark took them on a journey through the boy’s “short but full life”.

The family exited the church to a piano version of Somewhere Over the Rainbow, following the tiny coffin out into the grounds where Archie was to be buried next to his great grandmother.

A wake was to be held at Duck’s at Kilspindie, the nearby hotel where dad Jonathan worked as a chef.