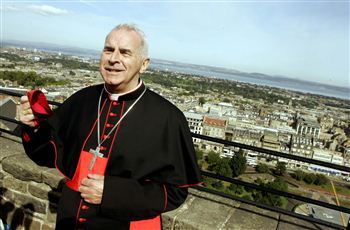 A CHARACTER dressed as John Knox – the famous Scot who led the country into a religious reformation – is to be included in a parade celebrating the first day of the Pope’s visit to Scotland.

St Ninian’s Day Parade falls on 16 September, which is coincidentally the day that Pope Benedict XVI is due to begin his whistle-stop tour of the central belt.

The parade will begin at Regent Road in Edinburgh, following a route down to Princes Street and featuring 1,000 pipers, as well as characters charting the history of Christianity like Mary Queen of Scots, St Margaret, and Robert the Bruce.

Scotland’s most senior Catholic Cardinal Keith O’Brien said the inclusion of the man who established Protestantism is a way to show that religions can walk hand-in-hand with one another.

Speaking at the launch of the parade at Edinburgh Castle, he said: “There have been many problems and disruptions over the years and we are not ignoring that.

“But I think the parade – and the visit from His Holiness – is a good way to show that both sides of Christianity can work together.

“John Knox is an influential figure in how the Catholic Church has evolved into what it is today, and I am happy he is being included with all the other historical Scots.

“When Pope John Paul II visited in 1982, this was the message he brought with him, and I hope it is continued.”

In 1560, the worship and government of the Roman Catholic Church were overthrown by parliament, and Protestantism was established as the national religion.

Following the ratification of Protestantism, Knox – often titled “the Great Reformer” – was appointed minister of the Church of St Giles, which was at that time the main church in Edinburgh.

The First Blast of the Trumpet, written anonymously but later revealed as a work by Knox, was one of his first pieces that challenged the Catholic Church – aimed heavily at Mary Queen of Scots – stating that the Bible said women had no place in ruling the country. 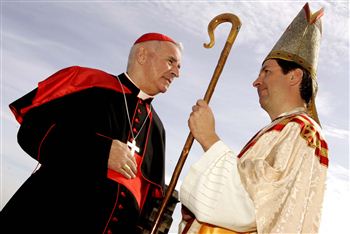 St Ninian was the first man to be named a Saint in Scotland, and his legacy has long been used as an occasion for national celebration and charitable giving.

This year Marie Curie Cancer Care and Mary’s Meals will be the two nominated charities to benefit from the day’s events – another way, Cardinal O’Brien says, for people to come together and help others less fortunate.

An emphasis will also be put on children from the 14 St Ninian’s schools across the country, the pupils of which have been asked to be VIPs in the parade.

Cardinal O’Brien said the schools are from a mix of Christian beliefs – Catholic, Episcopalian and non-denominational.

Pupils from St Ninian’s primaries in Edinburgh and Stirling attended the launch of the parade, which involved a mini-performance at St Margaret’s Cathedral in the castle grounds.

Cardinal O’Brien said: “So many young people take things in their stride easily, and I think the message is clear here that we are all Christians coming together to celebrate the same event, whether they are part of the Catholic Church or the Church of Scotland.

“They are all here wearing the same blue T-shirts and you can’t tell them apart, I think they are a wonderful example of people from all walks of life working hand-in-hand.”

As Pope Benedict XVI travels past the parade, pipers drawn from bands across Scotland are set to play ‘Highland Cathedral’ for him.