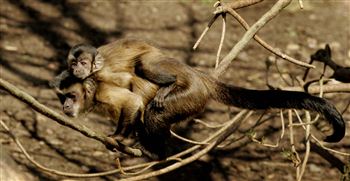 SIX lively new additions have been welcomed at Edinburgh Zoo in what has been a record breeding season.

The youngest, born on 29 July, is just over a month old and was born to first-time mum Penelope.

The capuchins live with common squirrel monkeys in two mixed communities in the East and West sections of the Zoo’s Living Links Centre.

The sex of the youngsters will be confirmed as the new arrivals become independent and start coming off their mums’ backs.

Charlotte MacDonald, head keeper of primates at Edinburgh Zoo, said: “This has been a really exciting time for our brown capuchin groups – not only have we seen more births than ever but also new first time mums too.

“For the capuchin community it is also good for other members to see the rearing of young in the group setting which is very important for social primates.

“As a curious species, and just like our visitors seeing these new additions for the first time, other members of the group can’t fail to be interested in the youngsters.”

Living Links is a field station and research centre for the study of primates, developed by the Royal Zoological Society of Scotland and the University of St. Andrews.

As well as their indoor enclosure, the brown capuchins and common squirrel monkeys at Living Links have extensive outdoor areas where visitors can enjoy great views of them frolicking and playing on rope structures.

Michael grabs a bigger pizza of the street food action