SCOTS RUGBY legend Ian ‘Mighty Mouse’ McLauchlan visited Edinburgh today to launch the Poppyscotland Hearts and Heroes Challenge which will take place in the Scottish Borders in May 2011.

The veteran star, who captained Scotland and played for the British Lions, was joined by Lance Corporal Emma Hendreson from 3 Rifles, Iain Henderson from Jed Forest RFC and Wendy Reid from Diageo to encourage people to sign up for the 29 mile event along the Southern Upland way.

Participants can walk or run the challenging route and raise funds for veterans charity Poppyscotland and rugby charity Hearts and Balls.

Mr McLauchlan is a director of Hearts and Balls and explained the charity’s work, saying: “ We help players who have suffered a catastrophic injury, as it can often have a major impact on their lives and the lives of their families.

“All the people involved with the charity are rugby people, so they all share a passion for the game and realise the importance of helping players who have become injured.

“We work closely with the Hearts and Heroes event and we get a good mixture of people involved from the worlds of rugby, the military and business.”

Iain Williams is a former player with Jed Forest RFC and is also still involved with the club in a training capacity.

He posted the fastest time for the 2010 event, finishing in four hours four minutes.

Speaking about the run, Iain said:” It’s a great challenge and there’s a wonderful spirit.

“The walkers start first and it’s great to have people ahead to focus on, they always cheer and show support for the runners coming up.

“I had done the London marathon a month before this year’s challenge so that was good training.

“Knowing there’s a big party at the end of it is also good motivation, it’s something to look forward to during the run.”

The fee for the event includes entry to the party afterwards at the grounds of Melrose RFC where participants can enjoy a three course meal and a live band with dancing later.

This year’s competition attracted 500 challengers and has so far raised more than £175,000.

Those taking part can choose from 12 mile, 21 mile or 29 mile routes, to suit a range of abilities and fitness levels. 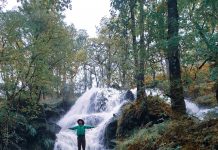