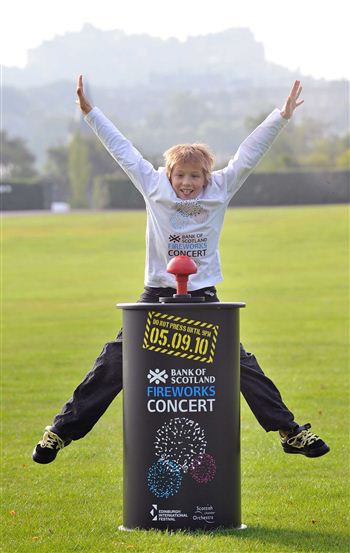 THE Edinburgh International Festival is all set to go out with a bang as the annual fireworks display gets ready for take-off.

The spectacular event tomorrow night will see live music by the Scottish Chamber Orchestra and fireworks by Pyrovision.

Over 100,000 fireworks, four tonnes of explosives, and hundreds of firing sequences, including the famous waterfall cascading from Edinburgh Castle, will be used during an unforgettable 45 minutes.

Last year the event attracted over 220,000 people viewing from vantage points across the capital and is the biggest annual event of its kind in Europe.

Lucky 10-year-old Tomas Brough has the honour of pressing the huge red button to start the show.

The primary 6 pupil of Sciennes Primary School won a radio competition which required him to make a fireworks impression.

He said: “I never practiced, my mum just told me to do it and then I won. My friends don’t believe me when I say I’m going to push the button.

“I have seen the fireworks twice before but it will be extra special to push the button. My mum will be there with me too.”

Tomas will not be alone on the platform as Commonwealth medal hopeful, Lisa McKenzie, 21, will also be pressing the big detonator.

She said: “I’m quite excited about Sunday. I was there last year so I got to see them. There is just something special about switching them on.”

Lisa is heading to the Commonwealth Championships in Melbourne as captain of the women’s voile team.

She added: “The last time I was there I got a silver team medal so I am hoping to get an individual one and up the team one as well this.

“I’m hoping to take part in the Olympics when they are in London. I think that every athlete ups their game when it’s the Olympics.”

The theme for the Edinburgh Festival was Oceans Apart and the fireworks display sets to continue that theme with music from  the world of film.

Acclaimed conductor Clark Rundell is rehearsing with the Scottish Chamber Orchestra for their programme of music by celebrated composers Bernstein, Hermann, Waxman and Korngold.

Rod Bain, concerts manager with the Scottish Chamber Orchestra and producer of the show tomorrow night, said: “We wanted to fit into the theme of the festival.

“There is some fantastic music out there from films and because the music was written to work with visuals it translates very well with fireworks.

“The concert is really unique and it is an amazing sight for all of the family.”

The live video of the Scottish Chamber Orchestra is also relayed to a screen in the Bank of Scotland Family Viewing Area in Inverleith Park, a free and unticketed viewing area particularly suited to families with younger children.

Those without tickets can enjoy the Bank of Scotland Fireworks Concert from Princes Street, which is closed to traffic for the evening and has an enhanced sound system carrying the Scottish Chamber Orchestra’s performance from the Ross Bandstand.

Joanna Baker, managing director of the Edinburgh International Festival, said: “I think that the special thing is that it is 45 minutes of fireworks and wonderful music.

“It is a fantastic way to finish the festival season. It is a really brilliant finale and a fantastic event for the city of Edinburgh. Even if people are not watching it in the gardens they can watch it from their own front doors.

“The event attracts one of the largest audiences in the world for a classical music event. It is a fantastic and very unique concert.

“It has been a very successful year for the Edinburgh Festival. There has been a fantastic atmosphere in the city and a huge number of locals and people visiting going to see the shows.”