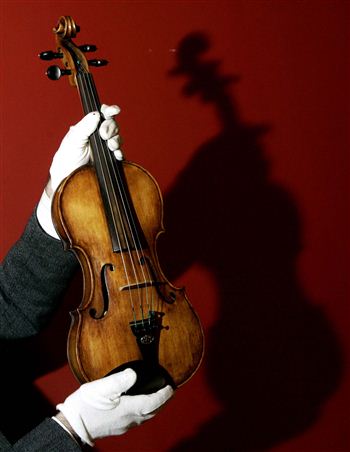 A VIOLIN carved from a tree from Arthur Conan Doyle’s home has gone on display in a prestigious Scottish instrument collection.

The violin, which has been named “The Sherlock Violin” by creator Steve Burnett, was carved from a 170-year-old sycamore tree from the author’s childhood home in Edinburgh.

In Doyle’s celebrated novels, the super-sleuth would famously play the violin while solving cases.

Steve Burnett, who carved the violin from the sycamore, said that having the violin added to the Edinburgh University Collection of Historic Musical Instruments was a “real honour”.

Steve, who is 46 and from Balerno, said: “Today marks the addition of the Sherlock Violin, made in 2009, to Edinburgh University’s prestigious collection of musical instruments.

“It’s a fitting place for it to be amongst a fine collection of beautiful musical instruments.

“I’m honoured to be included in a collection which is held in such high regard.

“It’s a weight off my shoulders seeing that it is going to do some fine concerting work as well.”

The violin is carved from wood from a sycamore tree outside Conan Doyle’s childhood home at Liberton, in Edinburgh.

It is believed that the ancient tree, which has been cut down due to having diseased roots, would have seen Conan Doyle “swinging from the branches” as a child.

After it was cut down, the school which now occupies the site contacted Mr Burnett about the possibility of carving it into a violin – a project which he completed in May of last year.

Luthier Steve added: “The staff from Dunedin School phoned me and asked me if I was interested in making violins out of the tree.

“I’ve been making violins for 15 years and I do enjoy putting stories to instruments, and to think that Arthur Conan Doyle would have been swinging from this tree when he was a child is fantastic.”

The violin is owned by Dunedin School, but it is on permanent loan to the collection.

However it will not just stand idly on display – the Sherlock Violin is already set to be performed at a number of concerts in the Highlands over the next few weeks, with proceeds going to charities such as the Marine Conservation Society and SOS Children’s Villages.

And neither is it the final stage of Burnett’s plan.

The remainder of the sycamore is to be made into a full quartet, with two more violins, a viola and a cello set to be carved.