Cardinal says Pope did all he could after child abuse scandal 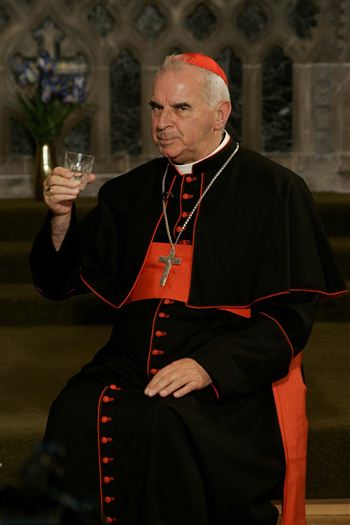 SCOTLAND’S most senior Catholic says the Pope’s visit to the UK will be tainted by the ‘church cover-up’ child sex-abuse scandal.

Speaking ahead of the Papal visit later this week, Cardinal Keith O’Brien said he believes Pope Benedict XVI handled the scandal in the only way he could – by saying sorry.

It has been reported in the past that the Pope played a leading role in a systematic cover-up of child sex abuse by Roman Catholic priests.

In 2001, while he was a Cardinal, he issued a secret Vatican edict to Catholic bishops all over the world, instructing them to put the Church’s interests ahead of child safety.

And, more recently, the Catholic Church has been rocked by fresh allegations from a Belgian commission looking into sexual abuse by Catholic clergy, which says it has received testimony from hundreds of victims.

The commission’s chairman Peter Adriaenssens said 488 witnesses came forward, most of them after the April resignation of a bishop for sexual abuse – which has set off a deep crisis within the Belgian church.

Cardinal O’Brien said he does not know if His Holiness will address the issue when he visits Scotland on Thursday, but if he does it will be to re-iterate his sincerest apology.

He said: “If he were to address it, it will be to reinforce how sorry he is for what has happened, but the volume of these crimes in Scotland is much less than in other countries.

“I think it will have some sort of effect on the visit, people will be thinking about the negative publicity.

“But we have got to work together now and combat the wrongs that have been done, and we must look to Pope Benedict as our leader in that.

“He has had to do that more than any other Pope – he is the only one to ever stand up and say ‘I’m sorry’ – and he has done it on behalf of his church leaders and members, and Bishops.

“The Catholic Church no longer tries to stand up on a pedestal – we have admitted our wrong doings, as well as making sure we safeguard for the future and make sure it never happens again.

“The way Pope Benedict handled it is the only way he could, he did not stand aloof, or hide behind his Cardinals, and he acted as a leader and came out with a sincere apology.”

Pope Benedict XVI is due to arrive at Edinburgh Airport on Thursday morning, before meeting the Queen and leading a parade down the city’s Princes Street.

From there he will make his way to Glasgow to hold an open-air Mass ceremony, with a crowd of up to 100,000 people expected.

Cardinal O’Brien added that during a series of recent trips around Scotland, the issue surrounding the scandal has barely been mentioned.

He said: “While it obviously will have an effect, no I don’t think it will overshadow the greater meaning of the visit – to unite people in their faith and to bring people of all faiths together.

“Going round Scotland over the past few weeks, no one has really mentioned it to me – anyone I speak to is excited and looking forward to such an important event, not only for Roman Catholics but for the whole of Scotland.

“All I can say is yes we did get it wrong in the past, but we must now make sure it never ever happens again.”

SuBo gives a toss for charity

Victim to sue church for counselling – not compensation

Pope crowds urged to stay away from Edinburgh Airport