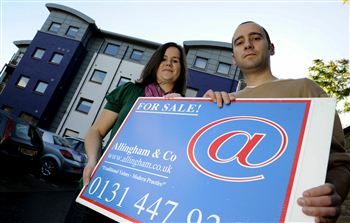 A COUPLE desperate to sell their one-bedroom flat before getting married have been forced to change their asking price to ‘offers UNDER £159,000’.

Duncan Hall, 33, and Laura Jack, 30, did not receive a single inquiry about the Edinburgh property, after putting it on the market in the traditional offers over style.

And although recent reports suggest that the housing market in Scotland is back on-the-up, the soon-to-be married couple say it has been a struggle just to attract viewers.

They decided the best way to shift it would be to encourage buyers by dramatically changing the wording – and the price.

Ms Jack, who works in banking, bought the flat in Duddingston in 2004, but later moved into her partner’s two-bed flat in Colinton and rented it out.

But, after deciding to get engaged, the couple decided to sell both flats in order to look for a new home.

Mr Hall, an electrical engineer, said: “Because Laura’s flat is an executive one-bedroom flat, there’s almost no market for it at the moment.

“We’ve spoken to ESPC and, at the moment, they don’t have a facility to do offers under, but they’re interested to see how it goes and they said they might add it to their options.”

He said it is now a matter of doing anything to get people interested or to make it stand out in any way.

He said: “We’ve got a friend that’s in property and had a chat to him.

“We’d been reading about someone who was selling his country estate and offering a TVR, and someone who offered the estate agent £1,200 if they could sell the property, so we started wondering what we could do to make the Edinburgh property market a little bit different.”

David Marshall, business analyst for ESPC, said: “Anything that will make your property stand out can be great to generate interest when the market is a bit quiet.

“We’ve seen the simple cash-back offers, or people offering to pay stamp duty, but you also see the more quirky ones where people will pay for the local gym membership, a fishing license or something.

“Offers under is clearly an unusual one.

“I would imagine that it will always remain a minority that would do that, simply because the benefit of it diminishes as soon as a lot of people are doing it.”