Primary one class sizes set to be reduced to 25 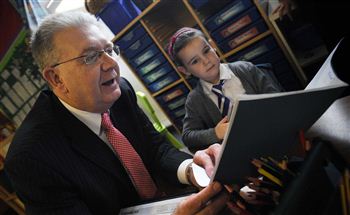 EDUCATION Secretary Mike Russell confirmed yesterday (Tue) that regulations to legally limit primary one class sizes at 25 will be laid in Parliament tomorrow.

In 2007 the SNP pledged to cut class sizes to 18 in primaries one to three – but the current legal limit is still 30.

This has created problems for local authorities as they have faced legal challenges for turning down placing requests when trying to limit class sizes.

During a visit to Letham Primary in Livingston, where all primary one to three pupils are in classes of 18 or fewer, Mr Russell said that he still has this target.

Mr Russell said: “We’ve now got the lowest class sizes on record so what we need to do is keep moving. I’ve got a target of 18 or below for primaries one two and three. We’re making progress at last and this will help us to do so.

“I don’t know when the target of 18 will be realised because it’s delivered by local authorities and because we are in very difficult financial circumstances.

“But I am absolutely clear that we should continue to think that this is one of the things that makes a difference in education and therefore it’s important that we keep moving on it and I know parents would want us to.

“The interaction between a smaller group of pupils and a teacher helps both of them. It helps pupils to have individual learning and it helps the teacher to give their best to the class.

Class size reduction has been a huge success at Letham Primary School.

Valerie Brodie, head teacher, said: “We’ve had class size reduction in primary one to three for the last three years and we previously had nurture groups within the school.

“As a result of the numbers and the programmes that we are using we have seen a significant difference in the achievement and attainment of the pupils in these smaller classes.

“We are able not only to support their academic progress but their achievement and their confidence and also to support the most vulnerable children within our school.

The new regulations – which have to be approved by the Scottish Parliament – would introduce a legal limit of 25 for all primary one classes.

Mr Russell will lay the regulations at Holyrood on Thursday and, if approved by MSPs, they could be in place in October this year.

But this means the regulations would not apply until the start of the 2011-12 academic year.

Liz Smith MSP, Shadow Minister for Children, Schools & Skills, said that the SNP should stop wasting time on this policy.

“The SNP made a very specific manifesto pledge to deliver class sizes of 18 or fewer for all primary one-three.

“Last year, after councils bluntly told the SNP that they couldn’t deliver this policy, that target was abandoned and replaced with a more ‘flexible’ 20 per cent and a blatant attempt to doctor the statistics by claiming that a class of 30 pupils with two teachers can count as two classes of 15.

“This is dishonest and is yet more proof of the abject failure of the class size policy.

“The amount of time which has been wasted by the SNP trying to square a circle on class sizes is unacceptable.

“There are so many other educational priorities just now, including making sure more of our pupils can leave school able to read, write and count properly.

“Class sizes should be decided by head teachers and not by government. The SNP should stop trying to hoodwink parents and teachers.”

Margaret Smith MSP, Liberal Democrat Education spokesperson, said: “The SNP Government failed to deliver their ‘flagship’ manifesto commitment to reduce class sizes to 18 for all primary one to three.

“Teachers and pupils all over Scotland have had enough of the Education Secretary’s hollow promises.

“With plummeting teacher numbers and many probationers unable to get a job, the Education Secretary needs a fresh approach to improving the teacher to pupil ratio in our schools.

“This will ensure a fair start for all our children.

“The SNP haven’t given any detail of exactly how they’ll deliver on this reduced pledge either.”

The Education Institute of Scotland (EIS) has said that the Government still have a lot to do.

Drew Morrice, assistant secretary of the EIS, said “The previous Government sought to introduce class size maxima by circular, and the present administration has simply invited councils to move towards class size reductions.

“Both approaches laid councils open to challenge on placing requests.

“The Regulations will bring certainty to provision across the country and avoid the “post code” lottery in class sizes across Scottish councils.

“However, this limit is less than the Government’s manifesto commitment to reduce primary one to primary three classes to 18 ‘as quickly as possible’.

“This should not be a one step solution.

“Provision must be extended to primary two and primary three as soon as practicable and thereafter to all stages of education, both primary and secondary, to provide coherent provision which will be understood, and welcomed, by parents.

“Otherwise, the momentum of this regulation will be lost.”