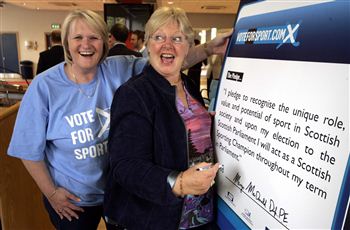 OLYMPIC gold medalist Rhona Martin and MSP Margo MacDonald teamed up today to launch a sporting campaign which brings new meaning to the phrase first past the post.

VoteforSport is designed to raise the profile of sport throughout the Scottish Parliamentary elections next year.

Election hopefuls will be asked to agree to: “pledge to recognise the unique role, value and potential of sport in Scottish society and upon my election to the Scottish Parliament I will act as a Scottish sporting champion throughout my term in Parliament.”

With the Commonwealth Games ready to kick off early next month, Ms MacDonald said sport has been in Scotland’s political shadows for too long, and became the first MSP to sign the Scottish Sports Alliance pledge.

She said: “I strongly believe that sport has a big role to play in Scottish society, it impacts on so many areas of life including health, education and communities.

“It is a great campaign and I am delighted to be the first MSP to sign the pledge.

‘The power to support a nation’

At the launch at the Centre for Sport and Exercise at Edinburgh University, Rhona Martin MBE said: “Sport has played a huge role in my life – I have had the honour of representing my country on the highest stage.

“However sport has a positive impact on all who participate from the local park to the Olympic Games.”

Rhona Martin was the skip of the 2002 Winter Olympic Curling Team who won the gold medal in a tightly fought match against Switzerland in Salt Lake City.

Sport on the political agenda

Former Scotland Rugby International and Scottish Sports Association board member Scott Hastings said: “If this campaign is to succeed we need to encourage sport in all areas of society and recognise the huge impact that sport has on our nation.

“There are many things that need to be done but having sport on the political agenda could significantly benefit the health of our country whilst promoting Scotland’s sporting profile.”

The campaign will not only encourage MSPs and candidates to sign the pledge but will also utilise the power of the some 900,000 men and women who take part in sport in Scotland.

Kim Atkinson, policy director of the Scottish Sports Association, said: “Sport is undoubtedly Scotland’s greatest social movement, with one in five people in Scotland a member of one of our 12,000 sports clubs.

“VoteforSport will give constituents a sporting voice for the first time in Scottish elections.”

The VoteforSport website went live this morning and can be visited at www.voteforsport.com