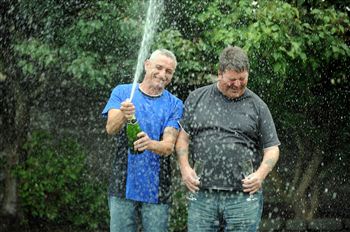 TWO jobless cousins who scooped more than £2 million on the National Lottery told how they discovered they’d won – while one of them was eating a sausage roll from Greggs.

Alan Rennie, 50, and William Air, 46, both unemployed, initially  left family and friends baffled when they went into hiding when they realised they would be sharing the £2.5million jackpot.

Alan said he found out about the win after returning home from the job club last Monday.

He said: “I had a job interview coming up on Tuesday for a carers’ job and I’d had a mock interview.

“I jumped off the bus, got the paper, went to Greggs and I was sitting down at home to a can of soup and a sausage roll.

‘I couldn’t believe it’

“I opened up the paper and thought ‘That’s my numbers’.

“It’s disbelief – I picked up my phone to William and said ‘Have you got the paper there?

“Go to the lottery numbers.’”

“I went to his house.

“He was shaking and I just picked up the phone to Camelot and they said they’d come down the next day.”

The winning ticket was purc 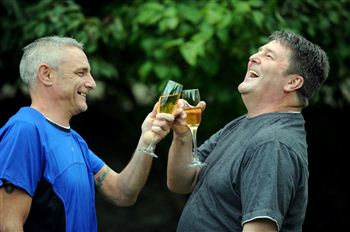 hased by Alan from a Londis store on Niddrie Mains Road.

He said: “The woman came up and she put the Lottery ticket in the machine and said ‘It’s looking like you’ve got a valid claim’ and it went haywire.

“A guy from London from the private bank that Camelot uses came up.”

Lottery staff confirmed that between them the men had won £2,497,823, and offered a short term payout – and both took £1000 each to take their families out for a celebratory dinner.

Last week they called off a press conference moments before it was due to go ahead because of last minute nerves – and because they had been out celebrating the night before.

At the weekend Alan’s brother Stevie reportedly said he had not heard from him for over a week.

He said: “He’s a really shy guy and didn’t want the publicity.

“But he went along to his local pub on Saturday night and told all his friends the good news.

“I told him he can now afford a Porsche but Alan said he wouldn’t be buying one of them.”

But, after almost two weeks of keeping a low profile, the men decided to reveal themselves as millionaires.

The cousins shook hands on the mini-syndicate 18 months ago when Alan lost his job, and both picked a row of numbers each and agreed to split any winnings over £10.

Alan, who is single with two daughters and one son, said he had no doubt about honouring their deal.

He said: “We should hands on it last year or a bit more.

“I was a bit down at the time and we were sitting half drunk, and William suggested it, and said ‘Why don’t we?’

“My last job was with JW Glazing and I worked there for seven years as a driver/glazier and lost that about 18 months ago.

“It’s life-changing but I’m taking each day as it comes.” 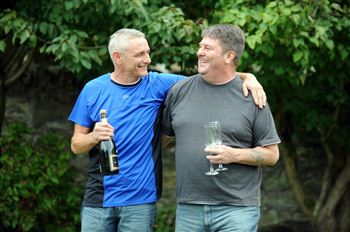 William, a father-of-two, works on-and-off as a carpet-fitter, and has been staying with friends after splitting from his wife Margaret.

He said he hopes the win with mark a turning point in his fortunes.

He said: “I work on and off, I’ve had two heart attacks and I’m on six tablets a day.

“I lost my sister, Anne, to cancer on my birthday in March this year.

“It’s not been a very good year for me.”

The pair said they have yet to decide to do with their winnings, but have vowed to stay in Craigmillar to take care of their families.

William said: “Before you win it, you think you’ll buy this, you’ll do that and when you win it it goes right out of your head.”

Alan said: “I’d like to pay the mortgage off.

“I was hoping to stay put – I want to be able to go for a beer and a game of pool like we used to.

With £2.5million the Lottery winners William and Alan could now buy: