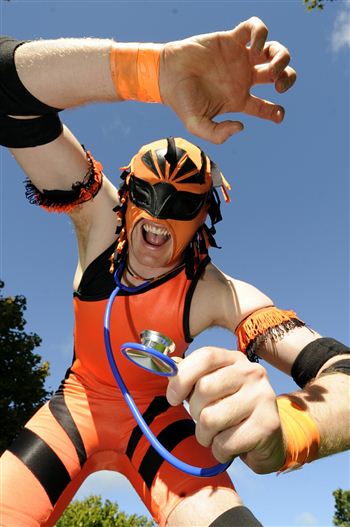 A SCOTS doctor is living a double life as he swaps his stethoscope and scrubs by day with a bright orange lycra body suit and mask at night.

Dr Dan Rodgers comes home from a hard day working with patients in East Lothian to slip into his lycra body suit and mask to become his Mexican wrestler alter ego ‘El Techinico’.

The 25-year-old has been a fan of the sport since he was a child and it was his dream to be a part of it.

He is now a wrestler in the World Wide Wrestling League, or W3L.

Dr Rodgers said: “It’s something that I grew up watching and I never really stopped, I guess.

“My friends watched it as well and one of them had found out about the W3L training school in Glenrothes and we all went and gave it a try.

“A few of my friends started as well but they dropped out, and I just stuck at it.”

The sport is inspired by the Mexican “lucha libre” or “free fighting” style of wrestling and this is how Dr Rodgers came up with the name for his other persona.

He says that El Technico is a tribute to the sport’s origins: “I think the literal translation is The Technician, it’s a Mexican wrestling term.

“The Technicians are what you call all the good guys in Mexican wrestling and the baddies would be called the Rudos.

“I chose the outfit because it’s a Mexican-inspired persona that I’m playing and in Mexico they’re very big on their masks and really, really bright colours.

“It makes you stand out among everyone else – certainly the children that come to the shows gravitate towards the characters in the bright clothes and the masks.”

Dr Rodgers lives in Macmerry, East Lothian, and has worked in hospitals around the Lothians.

He is now set to head off to Sydney where he will work in emergency medicine.

But despite having to explain his unusual pastime to colleagues, the subject has never come up with his patients.

He said: “They’re probably not that interested when they’re breathless, or crying from their broken ankle, so I don’t tend to bring it up with them.”

Dr Rodgers not only had to work extremely hard to get fit before entering the ring but also had to work to develop the persona of his character.

Despite all of this he has not sustained any injuries.

Trainer Mike Musso said: “A lot of people think what we do is just entertainment and it’s going to be easy.

“It’s not unusual to see new guys throwing up during the warm up.

“Only the determined are able to advance through our training programme. Dan’s the only student out of his group that lasted.”

There is one last chance to see El Technico in action before he jets off to Australia.

He will be fighting Irishman Damian O’Connor at Aubigny Sports Centre in Haddington on Friday.