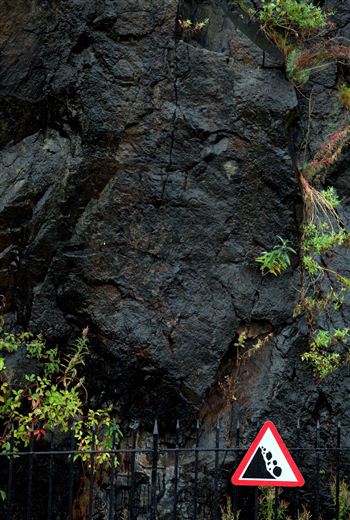 HEAVY rain laid siege to one of Scotland’s most popular tourist attractions today (thurs) forcing a road to be closed at Edinburgh Castle.

Sizeable chunks of volcanic rock the historic barracks sits upon were dislodged by the wet weather and sent crashing to the ground below.

The decision to close down the area for the safety of the public was then taken.

A spokesman for Lothian and Borders Police confirmed: “The call came in around 11am. The road was closed and remains so. No one was injured.”

Historic Scotland, who just 24-hrs earlier had celebrated seeing the Castle celebrate its best August on record with 190,266 visitors passing through its walled gates, described the incident as having involved a “small rock”.

A statement read: “The road was closed at Johnston Terrace earlier this morning due to a small rock being dislodged by torrential rain.  Immediate steps were taken in conjunction with Edinburgh City Council and the Police to close the road to traffic and pedestrians.  It will remain closed until a thorough inspection of the rock face is carried out.”

However passers-by could see several lumps of rock littered across pavements and on the road with claims larger sections had been taken away earlier.

One witness said: “Some bigger ones landed right on the road but they were taken away. It happens every so often.”

City of Edinburgh Council also responded to the emergency by issuing a Road Closure notice on Johnston Terrace.

They said it could stay in place until October 8 if the problem persists.

Historic Scotland had previously stated that very heavy rainfall, frost and plant roots can loosen rocks enough to dislodge them.

In 2006 what was described as a boulder smashed into a taxi as tourists fled smaller rocks.