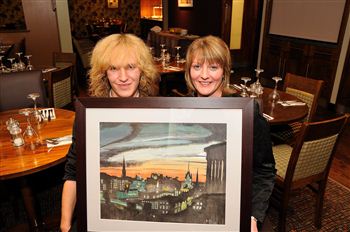 A TALENTED Edinburgh student’s artwork has been chosen to sit pride of place at a new restaurant.

Thyme, the new restaurant at Premier Inn Central on Lauriston Place, teamed up with George Heriot’s and St Thomas of Aquins  high schools to invite budding artists to create their own interpretations of popular Edinburgh landmarks.

The winning piece of art was created by Andy Jack, 17, a sixth year pupil at St Thomas of Aquins.

His panoramic interpretation of the Edinburgh skyline will now appear in the new restaurant and after a year on display it will be auctioned with all proceeds going to the Royal Hospital for Sick Children in Edinburgh.

On winning the competition Andy said: “I had a great time creating the piece of art and I am thrilled that I won this competition. Seeing my artwork being unveiled today was so exciting.

“I am looking forward to spending my Love to Shop voucher and visiting Thyme in the future.”

A selection of special guests including the former Miss Scotland, Nieve Jennings, attended the unveiling and sampled the new menu.

Natasha Kwok, a sixth year pupil from George Heriot’s won the runner-up prize, a £50 “Love to Shop” voucher, for her colourful drawing which incorporated various elements of Edinburgh, including the castle and Greyfriars Bobby.

Marion Oliver, general manager of Premier Inn, said: “It was fantastic seeing the reaction of our guests when Andy’s piece of artwork was revealed at the launch of Thyme. It really is a beautiful painting and we are delighted to have it on display in our new restaurant.

“The calibre of art entries from both schools was exceptionally high and choosing an overall winner was a difficult task. We are looking forward to working with the schools again in the future.”