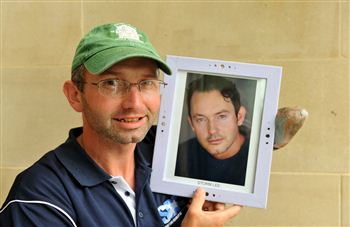 THE BROTHER of Scottish X Factor hopeful Storm Lee Gardner thinks he and judge Simon Cowell are bound to get along soon because they are “so alike”.

Cowell previously dubbed the 37-year-old singer “so annoying” and has been caught on camera repeatedly rolling his eyes and making fun of Storm Lee’s name.

But – the contestant’s brother Gary said he thinks it is all part of a love-hate relationship between the two.

He said: “Simon says he doesn’t like him and he has criticised my brother’s name a lot, but I think the real problem is they’re so alike.

“They say people with similar personalities can clash, and it could be the case here.

“Simon knows my brother has a good voice.

“He proved that when he said he wished he could put Storm’s voice ‘in someone else’s body’, but I’m not surprised they don’t get on because my brother is also a controversial chap and he doesn’t care what everybody else thinks.

“He walks to the beat of his own drum, just like Simon.”

Storm Lee was one of 32 contestants to get through to the judge’s houses stage of the competition during Sunday’s programme, singing a version of the Guns ‘n’ Roses song Sweet Child O’ Mine.

He was brought up in Edinburgh, before moving to LA when he was 16 to pursue a singing career.

He returned to London for the X Factor audition, where he competed with several thousand hopefuls to get to the next round.

And now he will be mentored by Louis Walsh along with seven other semi-finalists in the Over 28s category.

Gary, from Sighthill in Edinburgh, said he was confident his brother would wow crowds on the live shows.

He said: “I think as time goes on, Simon will warm to Storm.

“He showed that he has charisma and talent last weekend, and I think Simon will realise he’s a great performer and decent guy.

“He’s confident, but in no way arrogant.”

Gary, a mature student and keen amateur golfer despite being born with one arm, said his brother has been for his training for Louis, but the family does not yet know the outcome.

He said: “He sent us a postcard from Dublin saying ‘Wish you were here’.

“If he kept performing like he did last Saturday, I think we’ll see him in the final 12, but I guess it depends on how the judges see it.

And, commenting on the rumour that his brother has started a relationship with another semi-finalist, Kate Waissel, Gary said it would not shock him.

He said: “I don’t know much about that, he hasn’t mentioned it when we’ve chatted, but I wouldn’t be surprised.