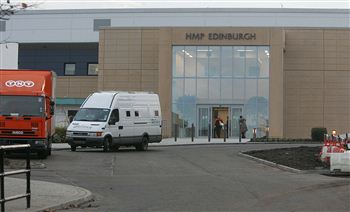 A PRISONER slashed a gay con’s face after being told by a guard “if he wanted to have you he would”.

Thomas Conington, 22, had been invited into Paul Fegan’s cell in Ingliston Hall in Saughton Prison to borrow a DVD player when the attack took place.

Conington – who knew Mr Fegan was gay – saw his fellow prisoner move towards him with “a look in his eye” and pulled out a razor blade and slashed Mr Fegan on the face.

Today at Edinburgh Sheriff Court he pled guilty to assaulting Mr Fegan to his injury and permanent disfigurement during the attack on June 6 this year.

The victim has been left with an eight inch scar on his left cheek after the attack.

The court heard that the two men got on well together in prison, often playing pool and chatting.

But they had had problems, with Mr Fegan circulating rumours that Conington was gay and that the two of them had met before in a gay bar.

Conington – who is straight – was worried that the rumours would leave him open to unwanted attention and spoke to a prison officer about it.

The court heard that in response, the guard said: “you better watch out Thomas, because if he wanted to have you he would”.

His defence agent Matthew Auchincloss told the court that this had been in the back of his mind when he launched on Mr Fegan.

He said: “Mr Conington had this in his mind.

“For some time Mr Fegan had been telling other prisoners and prison officers that he and Mr Conington had in fact met before in a gay nightclub in Edinburgh, which was not true.

“In the environment he was in this information being put about that he was gay might bring unwanted attention from others and Mr Fegan himself.

“Mr Fegan is a very large man who is physically intimidating.

“Mr Fegan had invited Mr Conington into his cell as he had offered to lend him a portable DVD player.

“When he went into the cell Mr Fegan made towards him and Mr Conington described that he had a look in his eye.

“He panicked, had this in his pocket and slashed him.”

Depute fiscal Ruth Ross-Davies told the court that Mr Fegan had been left with a permanent scar after the attack.

“He was first treated with first aid at the prison then taken by ambulance to Edinburgh Royal Infirmary where he was treated by the wound being sealed with 16 stitches.

“It will leave him with a permanent scar to the left side of his face and being seven to nine inches long.”

Sheriff Derrick MacIntyre deferred sentence on Conington until Thursday so that he could think about it.