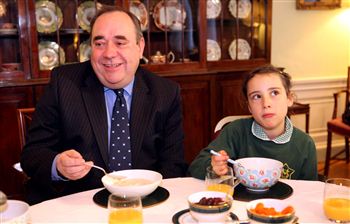 FIRST Minister Alex Salmond put a Scottish staple on breakfast when he joined a group of school kids for a hearty bowl of oats to mark the upcoming World Porridge Day.

Pupils from St Mary’s Primary in Edinburgh and Dalmally Primary School in Argyll sat down to a true Goldilocks-style breakfast with Mr Salmond today (Wed), and declared it was “just right”.

The schools are getting behind Mary’s Meals, a charity which provides daily school meals for 400,000 of the world’s neediest children.

Nine-year-old Eve Woahrling, a primary five pupil from St Mary’s, told the First Minister why she enjoyed helping the charity so much.

She said: “Most children get one bowl of porridge a day, but some others living in poor countries don’t get any, and if they do then they have to share it with their family.”

Mr Salmond said: “There’s no better way to start a busy day than with a bowl of porridge, which makes this breakfast with these hearty youngsters all the more poignant.

“Around the world, millions of children go to bed hungry and wake up hungry.

“This Sunday, Scots should get out their porridge pots and spurtles and cook up imaginative ways to raise money to help mark World Porridge Day and support Mary’s Meals to help feel needy children in some of the world’s poorest countries.” 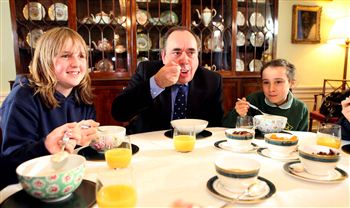 Abeer McIntyre, lead fundraiser for Mary’s Meals, said: “To many of us porridge is a ‘comfort’ food – something that warms us up on a wet, wintry day.

“To the children who receive Mary’s Meals in Malawi it is a comfort too, but in an entirely different way.

“For them, and their parents and community, it is the comfort of knowing that there will be a next meal and they no longer have to scavenge or work for it.”

And this weekend, Carrbridge will play host to its 17th annual World Porridge Making Championship, which organiser Linda Jolly says has become a real community event.

She said: “The core of the participators is about 40 people, but the whole town tends to get involved.

“I’m really looking forward to it, and while the proceeds go to such a worthy cause it has also put Carrbridge on the map.”

Scott Bruce, chairman of Carrbridge and Vicinity Community Council, said: “Mary’s Meals does tremendous work and we hope everyone will follow the First Minister’s lead and join in the spirit of the World Porridge Day fund raising efforts to support this worthwhile cause.”