The heartbroken 18-year-old has been left waiting for a miracle after being denied her place among the finalists in a row over her immigration status. 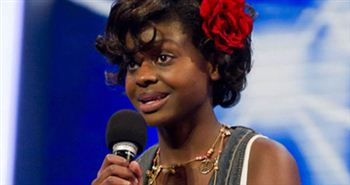 But while thousands flocked to signs petitions and join Facebook pages backing the talented teenager, her biggest boost came from Subo.

Asked if she thought that Gamu and her family should be allowed to stay in Scotland and stay in the competition, she said: “Well I think that’s the opinion of everyone at the moment.”

“I cannot really comment on it as it wouldn’t be fair to the family.”

Hopes have been raised that there could be some kind of break-though for the family before tomorrow night’s show after it was revealed they were spirited away in the middle of Thursday night.

They face deportation in a row with the UK Border Agency, blamed for Gamu being denied her shot at fame.

A neighbour at the family home in Tillicoultry in Clackmannanshire said:  “All four of them left around Midnight  last night (Thurs).

“I’m not sure where they went.”

Another added:  “They got taken away in the middle of the night but where they went I don’t know.

“They were a quiet family but they would always say hello.

“I would hate to be in their shoes at this moment in time.

“As for the X Factor, I don’t watch it but the girl is a nice singer.”

Pastor John Locke, who is the local pastor at Hillfoots Evangelical Church attended by the Nhengu family, said he had spoken to the family today (fri).

He said: “I don’t know where they are. They are feeling the way anyone else would in their situation.

“It is a rollercoaster ride for them.”

An online petition has been set up to help by the Church to try and keep the Nhengu family in the country.

Many members of the Church have been going around shops in the town handing out leaflets to encourage people to sign the petition.

Pastor Locke added: “We are just waiting to see the developments today before we decide what else we can do to help them.”