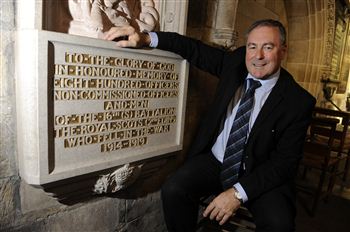 THEIRS is the inspirational tale of bravery and heroism which to this day remains among the most poignant in British football.

The story of McCrae’s Battalion – which saw two thirds of its men lost in the Somme during World War I – has already been the subject of books and documentaries.

Now, as Remembrance Day fast approaches, it has been revealed that a musical has now also been penned about those who lost their lives and is on course to be performed at next year’s Fringe Festival.

Steve Potter, 58, an investment manager from Duddingston in Edinburgh, wrote the show about McCrae’s Battalion which was famously made up of mostly Scottish footballers including almost the entire Hearts first team.

They enlisted into the 16th Battalion of Royal Scots, the oldest infantry regiment in the British Army.

Hearts at the time had won 19 of their 21 league fixtures, including eight straight victories and a 2-0 win against reigning champs Celtic, when 16 players enlisted and a further five tried but were deemed unfit to serve.

In all some 30 professional players from Hearts, Hibs and Raith Rovers were among those to join up to Sir George McCrae’s charge.

The battalion suffered a staggering 229 casualties in its first day of battle at the Somme with 347 wounded,

Even then, they made greater inroads into German lines than any other.

The musical follows the story through the eyes of two fictional supporters who decide to sign up alongside their heroes.

Mr Potter said he was inspired to write the musical by a moving trip to the battlefields.

Now he is preparing to put on a preview of some of the show, Farewell my Son, in a bid to find backers for a full-scale Fringe version.

Local students from the MGA Academy of Performing Arts in Edinburgh have  been learning seven songs from the show, which will be performed at an exclusive event at the Prestonfield House Hotel next month.

Mr Potter said: “It has taken me about three years to write this, and it all started with a family visit to the Somme.

“Our family had quite a few members who had died there, and so we went to try and find their graves, and I was inspired by the stillness of the place and the absolute beauty of it.

“It is so peaceful it is almost impossible to imagine such horrors ever happened there.

“Initially I just started writing a song as a tribute to the soldiers who went off to fight the First World War and died at the Somme. Then I wrote another song, and it just sort of evolved from there.

“It doesn’t tell the whole story of the battalion, but what I hoped to do is capture that spirit of young footballers signing up for war, and the eagerness and bravery they had when they went out there.”

Mr Potter admitted it was “a little nerve-wracking” preparing to see his musical performed by others for the first time.

But he has had some help from experienced professionals including veteran producer David Beer, who has been musical director for West End shows such as Cats and Guys and Dolls and Me and My Girl.