UPDATED: RUSH hour commuters watched on in horror as a woman leapt around 80ft to her death from the top floor of one of Scotland’s most famous five star hotels.

The 30-year-old – believed to have been an American business woman – jumped to her death from the prestigious Caledonian Hilton Hotel in Edinburgh.

Morning commuters craned their neck in disbelief and alerted emergency services as the woman teetered on the ledge shortly before 9am after apparently smashing a window in order to get out. 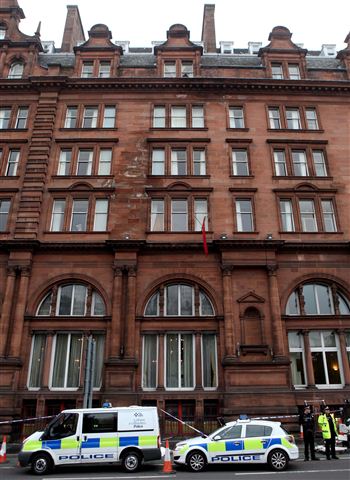 An ambulance crew was summoned to the scene but there was little they could do as the woman sat for a short time and then hurled herself onto the street below in front of a stunned crowd of onlookers.

Parts of Lothian Road – one of Edinburgh city centre’s busiest streets – were closed off as white suited forensic teams and uniformed police launched an investigation into the early morning horror.

Shocked hotel guests were ushered from windows as cleansing teams were called in to power wash the affected area just off Princes Street.

A police spokesman said: “Police responded to an incident that happened around 8.45am today, where a 30-year-old American national fell from a fourth floor window at a city centre hotel.

“Her death is not being treated as suspicious, and a report will be sent to the Procurator Fiscal.”

Andrew Wright, an administrator at St John’s Church sited across the road, said: “I arrived just after 9am and a Big Issue vendor said he had seen it happen just 10 minutes before.

“He said he saw a lady sitting on the window sill outside, and she was rocking back and forth for a while.

“When the ambulance turned up she tipped herself over the edge.

“He went home soon after that, he was very shaken, it is an awful thing for someone to witness.”

White sheets had been laid on the ground where the woman had landed, and one of the hotel’s top floor windows appeared to be smashed.

Guests at the Hilton could be seen staring down at the scene on the pavement.

A street cleaner vehicle with a Crime Stoppers logo was also present, to clean the street before it was reopened by police at around 11.30am.

One onlooker said: “I have no idea what happened, but whether she jumped or fell it is a real tragedy.” 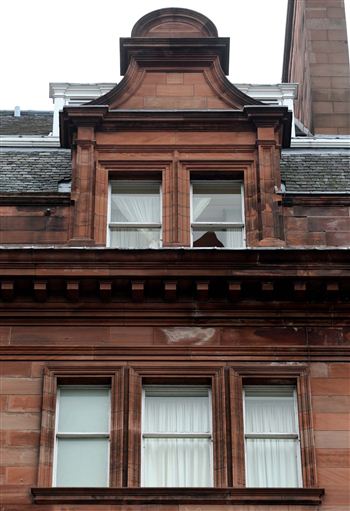 A police spokesman said they could not comment any further on the circumstances.

Many of the hotel’s guests who were heading out for the morning were none-the-wiser about the commotion, with one woman saying: “I slept in – no one has mentioned anything to me.”

No-one from the hotel built – a favourite for rich and famous guests staying in Edinburgh – was immediately available for comment.

Built in 1903 by the Caledonian Railway Company it is one of Hilton’s flagship hotels and underwent a multi-million pound revamp in 2008.

Big Issue vendor Martin Crawford told how the horror unfolded before his eyes.

Shaken Martin, who has worked the pitch outside St John’s immediately across from the scene for two years, told how hotel staff tried valiantly to take the troubled woman back inside.

He said: “I got here at 8.15am and guys from the hotel were trying to communicate with the woman who was sitting on the ledge outside.

“She had dark hair and was wearing dark clothes.

“One of the hotel workers appeared to be talking to her on a phone or some kind of radio, but she never once looked up.

“She was rocking back and forwards in a really sinister way and just kept looking down.

“The street was cordoned off before she had even jumped.

“They knew it was going to happen.

“As soon as the ambulance arrived she leaned over and let herself go.

“The ambulance staff hadn’t even got out of their vehicle when she did it.

“When she fell she bounced off the side of the building a few times, it was pretty horrific.”

He added: “She must have smashed the window before I arrived because I never saw her do that.

“They stopped the buses coming up Lothian Road for a while, it had made some mess.

“They used quite a few sheets to cover the blood but there is still some on the pavement now.

“I’m not sure if she was a guest at the hotel.

“She didn’t appear to be wearing expensive clothes but then again it was still a bit dark.

“I was a wee bit shaken after it had happened but it was just the shock.”

Bosses at the Hilton revealed their staff members are regularly trained for events like this one, and offered their condolences to the woman’s family.

A Hilton Worldwide spokesperson said: “It is with deep regret that we can confirm a female guest has died outside the Caledonian Hilton Edinburgh on Princes Street early on Wednesday October 13.

“We offer our sincere condolences to her family at this difficult time.

”The safety and security of our guests and staff is our primary concern and our team members undergo regular training in preparation for such an eventuality.

“We can confirm that Lothian and Borders Police are investigating the matter and we are fully co-operating with them.”

Two men unconscious after being jumped by gang of youths