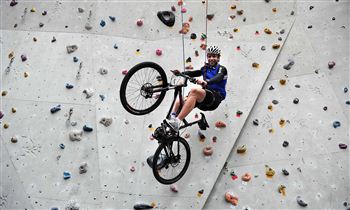 The EMFF runs from October 21-24 at the city’s George Square lecture theatre, with special events at EICA at Ratho including a talk from the Fife biking hero.

He broke the world record for cycling round the world in 2008 and this year cycled down the Americas from Alaska to Southern Argentina, a distance of more than 13,000 miles.

During this latest expedition he scaled the highest peak in both continents.

In the eyes of the EMFF director, Stevie Christie, this made Mark an ideal candidate to be the face of this year’s festival and feature as a guest lecturer.

Stevie said: “When I set up the festival eight years ago, I wanted to make sure we had a certain Scottish heritage involved so every year we try to show a couple of Scottish films and have some Scottish lecturers around.

“It captures everything that’s special about the mountains and wild places and adventure and I think everybody wants a bit of adventure in their life.

“Hopefully if they come along to the festival they will see other peoples adventures and be blown away by the stories and the films they see.” 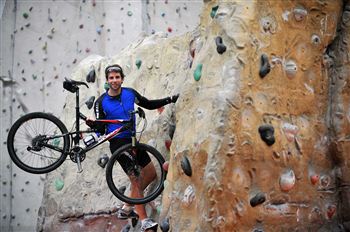 Mark, who lived in Edinburgh before he set off on his Americas trip, said he was delighted to have the opportunity to be back in the city to share his experiences in his first lecture on the subject on the final day of the festival, Sunday 24 October.

He said: “I knew the joys of seeing the world at bike speed, what it’s like to be in that mind set, seeing things under man power and meeting people on your own terms and I couldn’t see any of that on screen or much of that on television.

“I thought there was such an opportunity to share what that was like and I know from people feeding back to me that it’s given other people the encouragement to take on their own expeditions.”

Stevie said he hoped people would be inspired by the series.

He added: “It’s about being outside, enjoying the natural environment, challenging yourself whether that be climbing rock faces, cycling down single track or paddling across an ocean.”

“We try to do three things, entertain, enlighten and inspire.

“So to expand on that: entertain they’re going to have a great night out watch some good films make them laugh, cry, gasp hopefully and hear some pretty amazing tales as well.

“Enlighten, I suppose the films are not all about extreme sports they’ve maybe got an environmental aspect or cultural.

“So it’s a good way of putting that message across.”

“Finally inspire, it’s a bit ironic that we celebrate the outdoors by being indoors, but my hope is that if you do that just one weekend a year then it’ll make them go away thinking what can I do next weekend, what can I do next year and they can go off and have their own adventures.”

Mark’s insatiable desire for adventure continues and details of his next trip remain under wraps, but while confirming that he will be setting off again in 2011, revealed the trip will not involve the bike.

She said: “He’s really good!  We watched him when he cycled round the world.”

Her dad Stephen, 44 year old truck driver seemed equally impressed to meet the Scottish cycling star, and requested Mark to pose with himself and Zara for a photo, “What he did was amazing.  It inspires you to do something brilliant,” said Stephen.

Manager of Edinburgh International Climbing Arena at Ratho, Graeme Gardiner views the EMFF as a great opportunity to showcase climbing.

Graeme said: “Being the world’s largest indoor climbing facility we want to be at the forefront of climbing.

“Mark offers a great opportunity to raise the profile of the sport and inspire young climbers, maybe not to the extremes though.”