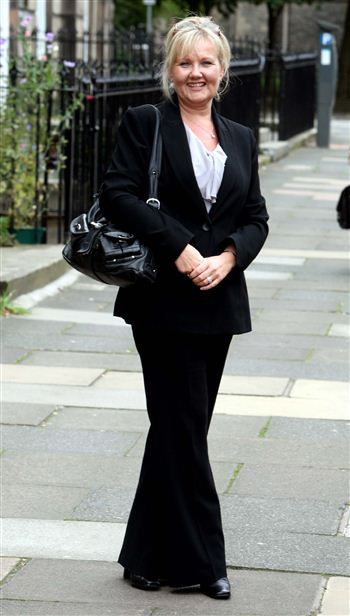 DISGRACED former Labour politician Jim Devine persuaded a friend to call his office manager pretending to be a journalist looking into MPs expenses, it was claimed today.

But when she took time off for stress after discovering his actions had been an elaborate hoax, he told other staff that it was her being investigated for fraudulent expenses claims used to fund a non-existent gambling habit.

The bizarre series of events were described to a hushed Edinburgh Employment Tribunal today (Thurs) as part of office manager Marion Kinley’s case against her former employer.

Even the judge – Jane Porter – appeared to gasp as the full details of Devine’s behaviour was relayed to the hearing.

Miss Kinley took Devine to tribunal over unfair dismissal and breach of contract during her employment with him from June 2006 until May 2009.

She told the court that she had received a message on her work mobile in March 2008 from a woman saying she was a freelance journalist investigating expenses at Devine’s Livingston constituency office.

When Miss Kinley contacted her employer about it, he said he would sort it out.

But when he got back to her, Devine claimed that a paper was preparing to print an article with full details of Miss Kinley’s salary, and that they would be claiming that Miss Kinley was having an affair with Devine.

Just a day later, Miss Kinley discovered that the whole incident had been a hoax orchestrated by the MP.

She told the tribunal: “On March 29, 2008, which was a Saturday, there was a message on my work mobile from a woman who said she was a freelance reporter from the Sunday Telegraph.

“She said it was to do about MP expenses and she wanted to speak to me in regards to that and in particular about Miss Kinley’s salary and I was to give her a ring back.

“I rang Jim first and told him about it. He said ‘I knew it, I knew it, I had a reporter on to me last week’.

“When I said I was happy to call her back, he said ’just you leave it, don’t you phone her back.

The following day, Miss Kinley received a call from Devine saying that he had spoken to Alan Cochrane, the Scottish editor of the Telegraph.

Devine claimed that Mr Cochrane had told him the paper would be running an article on the fact that Miss Kinley had the second highest salary in the House of Commons.

Miss Kinley said: “He said: ‘This is fucking serious, Marion.

“’This woman is a reporter and doing a big article on my office and the reason they are doing it is because you are the second highest paid in the House of Commons.

“I said to him, ‘no amount of money in the treasury would entice me to have an affair with you’.

“I wasn’t having that printed. I was actually more worried about that than them printing my salary.”

The ex-MP then told his employee to double check the office expenses claims – including staff salaries for the past year – which Miss Kinely was responsible for.

Working through the night, Miss Kinely made sure everything was in order before she returned to work the following day.

But when she came into the office the following day, the office manager realised it was all a big hoax.

She said: “I went into work and checked my emails and I had access to Jim’s email.

“There was one marked urgent so I opened it.

“It was from Fiona Fox mostly about the Embryology Bill.

“She is the Director at the Science Media Centre in London.

“But at the end there was a PS said that ‘I phoned that poor woman in your office and left the message. Hope you’ve put her out of her misery.

“Remind me never to work for you’.

“There was another one from her which had been sent on Saturday which read ‘I phoned that poor woman in your office and now feel awful’.

“I still don’t understand why he did what he did. I was just shaking – I just couldn’t believe it.

“I just gathered up my stuff and went home sick.”

Miss Kinley went on to say that she phoned and confronted Ms Fox when she got home and asked her what was going on.

She told the tribunal that Ms Fox had said: “I’m really sorry but Jim asked me to do it. I don’t know why but he seemed to think it would be hilarious.

“I’m really sorry, he phoned me back later on Saturday night and said it hadn’t worked anyway, but thanks.”

That was the last day that Miss Kinley was at work.

She wrote a letter of grievance to Devine – which she has never heard back from – and went to her doctor and was signed off sick.

When other staff members asked Devine where Miss Kinley was they were told that she was having a “wee break”.

Eventually, when Miss Kinley still wasn’t back, Devine started to tell them that she wouldn’t be back as she was being investigated by the police.

Miss Kinley said: “Another member of staff had a conversation with Jim in June 2008 and asked about me.

“He said to her ‘between you and me she’s not coming back.

“She’s being investigated by the police for fraud for making fraudulent claims.’

“He said the reason I had made these false claims was because I had a gambling addiction and I went to the casino three times a week.”

In September 2008, Devine sent a letter to Miss Kinley about her extended sick leave, asking if he could contact her GP.

But when Miss Kinley tried to return to work on October 6, 2008, Devine suspended her on full pay over allegations that she had made false claims.

It was the start of ongoing discussions between Devine and Miss Kinley that eventually led to her resignation in May 2009.

The tribunal heard that at no point was she contacted by police, and that Devine tried to settle matters by paying Miss Kinley three months wages – but in return she would have had to sign a confidentiality agreement.

Miss Kinley said: “I wasn’t having that. I wanted him to apologise for what he had done and to tell people that he lied.

“He wanted to give me money to shut me up and make me look like a thief and had a gambling addiction.

“What he suspended me on, he just made up.”

In May 2009, Miss Kinley was contacted by the Department of Finance and Administration who said that they wouldn’t be able to pay her anymore salary as they were investigating criminal claims against her.

But this was the last straw for the office manager, who had no choice to resign as she needed to support herself and instantly filed a claim to the employment tribunal.

Mr  Devine wasn’t at the tribunal and has lost the right to defend the claim as he hadn’t responded in time.

The tribunal – which continues – has still to hear evidence from Miss Kinley about the remaining circumstances surrounding her claim for unfair dismissal and breach of contract.