Whisky no more as thief plunders the world’s oldest malt

A RARE limited edition bottle of the world’s oldest whisky has been stolen at a prestigious European trade fair.

Shocked exhibitors discovered the vintage Mortlach 70 Years Old was lifted from a table by a thief when no one was watching. 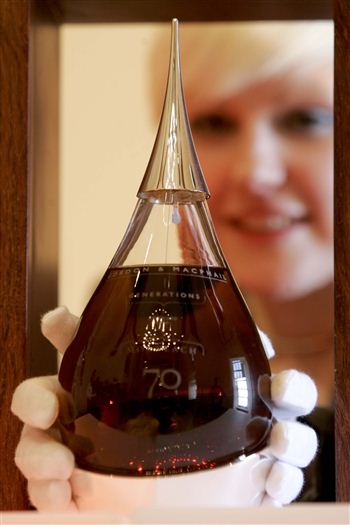 The attractive looking 20cl decanter was simply taken from the tasting table of Swedish importers Symposium at the weekend.

It was reported to local police, but so far no trace has been found.

Distillers Gordon and MacPhail behind the classic ‘Generations’ range of whisky revealed it will be almost impossible for anyone to sell the bottle on because it is so rare.

The thief also left behind vital packaging and certificate, a must for any serious buyer.

One of just 162, it was part of a limited number of bottles made by the company under their “Generations” range.

Distilled at the Mortlach Distillery in Dufftown on October 15, 1938, it was left to mature in a first fill oak, ex-bodega sherry hogshead cask at their warehouse in Elgin.

It was bottled at Boroughbriggs Road in Elgin on October 15, 2008, boasting a natural cask strength of some 46.1 per cent.

Regarded as a real gem among whisky aficionados, distillery bosses said they were upset that real fans would now miss out.

Michael Urquhart, Joint Managing Director of Gordon & MacPhail said: “This is a pretty despicable act – depriving whisky connoisseurs of a once-in-a-lifetime opportunity to sample such a unique whisky.

“We would urge the thief to put it right and return the goods immediately.

“The bottle is engraved with its own unique number, number 53, and we would ask whisky lovers around the world to be vigilant and report any attempts to resell the whisky.

“This is a very special whisky which was the first of a series of older whiskies we are releasing under our “Generations” label.”

Launched by the whisky specialists in March, just 54 full size bottles were made along with 162 smaller decanters.

At a recommended £10,000 for the full size bottle, the rare malt is already selling for far more at auctions across the world.

The smaller decanters start retailing at £2500.

Whisky experts say it has a delicate, fresh, fruity taste with attributes of waxiness and smokiness.

It comes in a tear shaped crystal decanter with a removable sliver stopper and handmade presentation box made from Brazillian Rosewod.

However its value is only assured with the accompanying certificate signed by joint managing directors David and Michael Urquhart.

The Scotch Whisky Association said to their knowledge it was the first 70 year old bottle of whisky ever bottled for retail sale, making it very distinctive in the marketplace.

The collection was only released for general sale in March this year.

Mortlach was the first distillery to be built in Dufftown, founded back in 1823 on the site of an original illicit still.

The family run firm now exports to 50 countries and was awarded the Queens Award for Enterprise in International Trade last year following a 94 per cent increase in total exports value across the preceding five years.

Benromach vintage vehicle theme day set to be a success