TRAIN delays and cancellations signalled a disastrous start to the opening of a new station by Transport Secretary Stewart Stevenson today (mon) as scores of passengers had to be ferried by coach instead.

An overhead line fault at the new Bathgate Station in West Lothian meant that only one line was running on the busy Edinburgh route instead of two, leaving scores of people stranded. 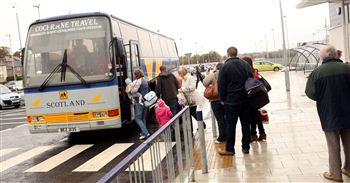 A replacement bus service was eventually put on for passengers – but it was an inglorious start to the first major opening on the new £300m Airdrie to Bathgate project which is due to come on track on December 12.

Transport Minister Stewart Stevenson had talked of how the new station will soon allow passengers the chance to travel direct from Helensburgh and Milngavie, in the west, to Bathgate and Edinburgh in the east.

But no-one was going anywhere yesterday as trains to and from the station came to a standstill.

A Network Rail spokesman said that the delays would last hours as all of the train times had to be reconfigured.

Some passengers had already left on a train at 9:25am.

But it was forced to stop on the way to Edinburgh and limped back to Bathgate an hour and a half later as it too hit the buffers. 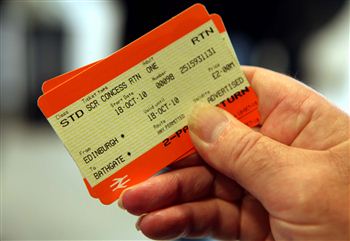 Esther Sutton, 38, a bank worker from Bathgate, said she  was late for work because of the delay.

She said: “Hopefully I will be getting on a bus. I had to contact work to let them know I’ll be late.

“It is really unfortunate that this has happened on the opening of the new station and it must be a bit embarrassing.”

Another passenger, Daniel Gouws, 41, also from Bathgate, had his sister over from South Africa for a visit and was hoping to take her to Edinburgh to see the sights.

He said: “We will probably wait till tomorrow to go now – and we will take the car.”

Linda McDonagh, 50, a charity worker from the town, said she was expecting delays. 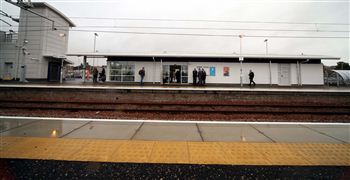 She said: “We left two hours early because I’m from here and I knew there was going to be a problem.

“I thought there would be a problem because it’s the same people.”

Andrew Darville, 20, a student from Bathgate, said: “I’m not really in a rush. It’s not great but it’s to be expected with it being new.”

While Anne Ferguson, 58, from Bathgate was travelling to Blackpool with her daughter and two granddaughters.

She said: “We got here early as well as we have a connection to catch.

“They are putting on a bus but we don’t know how long that will take and with two young ones with us.

“They are getting us a taxi and they have been very helpful.”

Lynn Christie, 32, a civil servant from Bathgate, said: “It’s a bit of teething problems so I’m not shocked.

“As long as they try their best.” 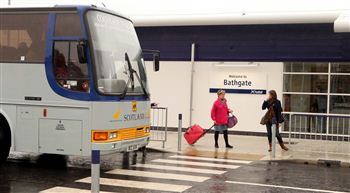 The line is now ready for the beginning of driver training ahead of the opening to the public on 12 December.

Transport Minister Stewart Stevenson said: “Bathgate Station has been at the very heart of the local community since the industrial revolution when it supported the local and national economy, to today where it sees over half a million passenger journeys a year.

“The Scottish Government is determined to see continued investment which will deliver sustainable economic growth for our communities and businesses, and today’s formal opening of the new Bathgate Station underlines that commitment.”

The new line and station constructed by Network Rail and funded by Transport Scotland is on schedule and on budget.#

Ron McAulay, Network Rail director Scotland, said: “Purpose-built to meet the needs of the modern commuter, the new Bathgate Station will provide the travelling public with some of the best facilities available anywhere in Britain.

“With the new railway set to deliver a quick and regular service to both Edinburgh and Glasgow, the new line further demonstrates the growing appeal of rail travel in Scotland and provides motorists with a genuine alternative to the daily car commute.”

He added: “I am delighted to formally accept the handover of the station on behalf of ScotRail and its customers. 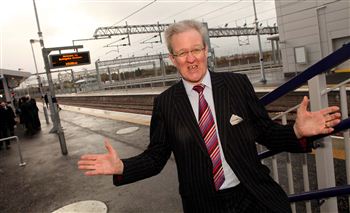 “It is only 400 meters away from the former station but offers so much more for our customers.

“I believe the station and the new line will be very popular and will encourage even more people to shift to train travel.”

Despite yesterday’s problems some still hope the new rail link can make all the difference to Bathgate residents when it opens in December.

The Bathgate Brass Band were playing at the opening of the station and Gillian Lawson, fundraiser in the band, said that the new link to Glasgow will make it easier for band members who go to university in Glasgow to get to band practice.

She said: “They come here twice a week for rehearsals and all of the engagements that we have so it is quite a lot of time travelling for them.

“This will really make a difference.”

Network Rail confirmed services ceased at around 9.30am and were only back on track at 1.05pm.

A spokesman said: “Services on the Bathgate branch line were disrupted on Monday morning by a power failure at Livingston North.

“Engineers worked as quickly as possible to rectify the fault and minimise disruption for passengers.

The Scottish Government said they were unable to comment.