A SCOTS property tycoon facing multiple charges of fraud and money laundering has been gunned down outside a busy Scots health club in front of dozens of stunned gym members.

Robert Kelbie, 27, a property developer, was shot and wounded outside Bannatyne’s Health Club at Newcraighall in Edinburgh during one of its busiest periods as he walked through the car park. 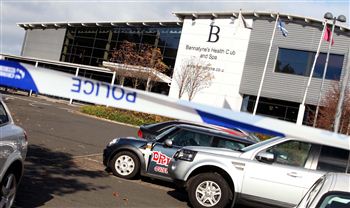 He was initially treated at the Royal Infirmary of Edinburgh after Wednesday’s team-time shooting which happened between 6pm and 7pm, but police said he later discharged himself.

The ex-boxer who dated former Miss Scotland, Lois Weatherup, 27, was facing five fraud charges, three for money laundering, attempted fraud and accused of being involved in a fraudulent scheme.

Lothian and Border Police were unable to comment on any potential motives or suspects in the potential hit, but confirmed the target was being treated as a victim of crime in relation to the shooting.

The health club and neighbouring businesses including The Cuddie Brae pub and the three star Premier Inn hotel were sealed off by police cordon for most of today (Thurs) while a team of forensics tended the scene.

Detectives and police officers accompanied the team to the car park area directly in front of Bannatyne’s where the forensics, dressed in white coloured coveralls, conducted a finger-tip search.

A few staff were permitted to enter the police controlled zone after their details were logged by officers but those hoping to use the facilities at the health club were turned away.

Chief Inspector Richard Thomas, in charge of the investigation, said: “We know that the area outside the building was busy with people last night and we are appealing for anyone who was there between 6pm and 7pm and may have seen something suspicious to come forward.

“Similarly, someone using the facilities last night may have seen something that could be vital to our investigation and we would encourage them to speak to us as a matter of urgency.

“While our investigations are at an early stage, they are progressing at a good pace.

“We would like to thank the members of the public who may have been inconvenienced last evening for their patience.”

A team of detectives investigating the case will be based at Craigmillar police station where an incident room will be set up.

CCTV footage from various vantage points that was also being reviewed by police.

Two students from Queen Margaret University were passing the scene while on their way to the shops at Fort Kinnaird.

They said they were shocked by the shooting. 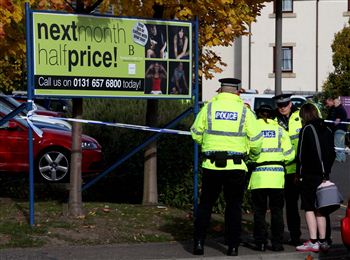 Her friend, radiography student Louise Thoms added: “I thought it was a really nice quiet place. Not now.”

Alistair Orr, 60, manager of neighbouring business Farrell Kitchens said: “I left work at 6pm and everything was completely normal.

“I didn’t get to the office until 10am, I thought it was a speed trap.  Then I saw the ticker-tape and thought it might be a crash.”

The Cuddie Brae confirmed that they were shut and waiting for police to allow them to re-open, but also refused to comment.

The huge Newcraighall branch of Bannatyne’s markets itself heavily as being family friendly with a crèche and children’s classes including one called Giggling Gorillas.

It also boasts a 20 metre pool, sauna, steam room and baths and various fitness studios along with a gym and more than 80 classes.

A spokesperson for the fitness chain said: “It’s a police issue and concerns the area outside the building, not the club.

“The club closed last night and will remain closed until the police tell us we can open.

“I understand that staff are being allowed to re-enter the building.”

The club is among 61 in the UK owned by Glasgow born Duncan Bannatyne OBE, best known for his role in BBC TV show Dragon’s Den, and listed as 351st wealthiest in the Sunday Times Rich List.