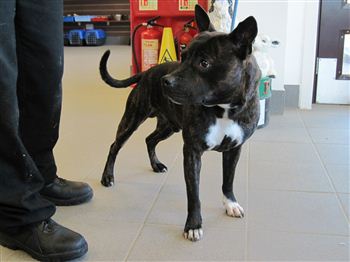 A DOG who was cruelly left tied to a tree with a washing line could have died in the freezing conditions – say an animal welfare charity.

The staffordshire bull terrier, who has been named Rex by Scottish SPCA staff, was left near a quiet footpath in Bathgate with the line tied around his neck.

The charity was called by a local dog warden to collect the abandoned dog on Monday.

SSPCA inspector Jenni Surgeon said that it was luck that the dog was found: “The dog had been abandoned in a quiet area so it was lucky that someone spotted him when they did, otherwise he could have perished in the freezing conditions.

“The washing line was tied directly round his neck rather than attached to a collar, which could have seriously harmed him if he hadn’t been found. It could have got tighter and tighter and caused injury.“It was in quite a well covered area – I didn’t spot him until he was pointed out to me.

“He was probably dumped there in the morning as he was in good condition but he was very cold when I arrived.

“Whoever did this obviously didn’t care what happened to the dog as they didn’t leave any food or water for him and couldn’t have known someone would find him.

“We’d urge anyone who saw someone with a staffie matching the description in the area on Monday morning to contact our Animal Helpline.

“It makes you annoyed to find animal like this – if you need help, contact us for help, don’t abandon it.”

Rex is now recovering well at the SSPCA’s Animal Rescue and Rehoming Centre in Balerno.

Ms Surgeon added: “He’s a friendly dog although he was quite timid at first.

“He’s young, probably about one to two years old and there are marks on his body that suggests he usually wears a harness.”

Scottish SPCA chief superintendent Mike Flynn said Rex was one of hundreds of abandoned dogs cared for by the charity each year.

“Abandoning an animal is a criminal offence that carries stiff penalties. Anyone found guilty of doing so can be banned from keeping animals for life or a fixed period.”

Search for the identity of St Vallery hero gets underway

Scottish SPCA urges public to be #WildlifeWise this Spring