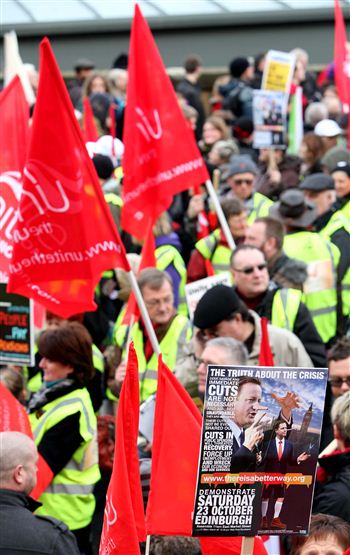 MORE than 20,000 people marched through the centre of the Scottish capital to demonstrate against the financial cuts announced in Westminster this week.

The mass of demonstrators, made up of trade unionists, community activists and members of the public assembled on New Market Street, close to the City of Edinburgh Council offices this morning (Sat).

The Scottish Trades Union Congress marched behind the banner of their campaign ‘There’s a better way’ and voiced their opinion that the £81 billion cuts announced by George Osborne do not favour public sector workers and are not the best course of action for the long-term Scottish and UK economy.

“We feel very strongly about this and are sending a very strong message to the Government at UK level that we are not prepared to stand for this we are going to fight for our jobs, services and communities.”

The General Secretary of the Education Institute of Scotland, Ronnie Smith fears that the cuts will detrimentally affect schools and education.  He said: “The next step is for the Scottish Government to decide how it’s going to spend the money it’s got, and local government.

“We want them to look at this demonstration and listen to what the ordinary men and women and young people of Scotland are saying to them and that is that there is a better way.  And we can’t make children pay for the mistakes of bankers and financiers.”

STUC President, Joy Dunn began the proceedings and outlined a campaign for sustainable jobs, fair taxation and a decent living wage in Scotland.

She said: “These are cuts that would put Margaret Thatcher to shame.”

“I am not going back to the days of Thatcher, of destroying communities.  Some communities have still not recovered. These cuts are not necessary, they are a political choice.

“The Chancellors solution, is throwing young people on to the scrap heap.”

The Scottish Government Justice Secretary and MSP for East Edinburgh and Musselburgh, Kenny MacAskill joined the front ranks of the march along with Scottish Labour leader, Iain Gray.

Both stated they thought the cuts announced by George Osborne were too much, too quickly.

In reference to the Conservative party, Mr MacAskill said: “They are not representative of Scotland.  They are imposing their ideological values, attacking the poor, the most vulnerable.”

He added: “The cuts are too deep and far too severe and are going to damage our economy and our society.”

Mr Gray said: “These cuts don’t need to be made.  They are too deep and too fast and threaten the economic recovery of this country.

“In the last election on million Scots voted for Labour.  They did not want hard, fast, deep cuts.”

He added: “We’ve been looking at figures this week that show these cuts could destroy 100,000 jobs.”

A variety of people attended the demonstration with various motivations and concerns.

Angela McHugh, 60, from East Renfrewshire was made redundant from her job as a community worker for the council 6 months ago.  She said: “We are not going to let them away with this, there should be millions of people here.  We should be doing what they are doing in France.

“They are decimating the whole public sector and putting money into the hands of their friends the bankers.  We should call a general strike.”

She added: “The cuts are already affecting the next generation.  My son and his girlfriend work for the council and they fear for their jobs what sort of a future can they build?”

Brian McQuillan, 40, a learning support worker from the Southside of Glasgow brought his four year old son, Sean To-McQuillan along to participate.  He said: “These cuts are going to affect my son’s future.

Mr MQuillan said: “I tried to explain it in a way that he would understand and said that it could mean there were no dinner ladies at his school.  I wanted to make it real to him and explain it rather than going round shouting.”

John White, 62, from Yetholm works for Skills Development Scotland.  He said: “I’m nearly retired and I’m concerned about pensions and care for the elderly.  Who is going to provide the care and where’s the money going to come from?”

Kathy Lloyd, 63, a retired lecturer moved to Edinburgh two years ago from Oxford.  She said: “I am incensed with the way in which the Government are almost celebrating the cuts.”

“In Scotland people really care about the public service.  In England they are putting it all out to tender, I think they’ve given up.”