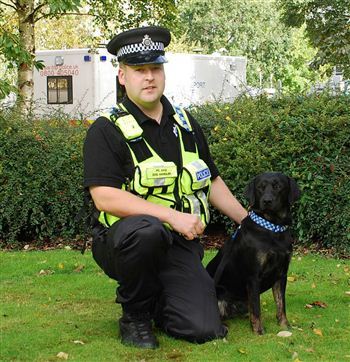 A FAILED Guide dog which couldn’t concentrate on the task at hand long enough to help lead blind people has bagged a new job – collaring crooks on Scotland’s railways.

Two-year-old Gem, a black Labrador and Golden Retriever cross, was too easily distracted by birds and other animals to cut it as a Guide Dog.

But after an intensive eight weeks of training with the British Transport Police she is now helping lead officers in hunting for drugs and cash.

And  handler Constable Raymond Martin said he was delighted to have his latest recruit on the team.

He said: “Gem showed an immediate aptitude for her new role, displaying a natural ability and willingness to work and search.

“She is a highly intelligent dog and has taken to her new role and really enjoys doing what she does.”

Gem now lives with Constable Martin and his other fully-trained pooch – who specialises in searching for explosives.

He said the pair have quickly become great friends.

The Scottish area now has a team of four dogs, all of whom have the capability of detecting drugs, explosives and cash, as well as keeping public order.

Gem is one of a litter of nine pups born at the Guide Dogs breeding centre near Leamington Spa.

She spent her first year with a volunteer puppy-walking family in Edinburgh, to allow her to be socialised and given the experience of life in a busy city.

Nicola Smith, a re-homing officer with Guide Dogs, said: “During her early training at our school in Forfar it became apparent that she wouldn’t be suitable as a guide dog, as she was easily distracted by birds and other animals.

“Due to the time and effort, and of course dedication of Gem’s puppy walkers, it was felt she would be well suited to an alternative working career.”