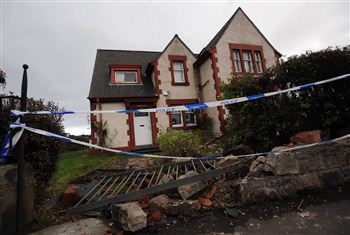 A MAN has died after crashing his car into a front garden following a suspected heart attack.

The 51 year-old is believed to have suffered a heart attack while behind the wheel of his BMW causing him to veer off the road at Edinburgh’s Drumbrae round-a-bout around 6am today (tues).

His car ploughed through a metal railing and a stone wall before stopping a few feet away from the front door of Meadow Place House at the corner of Meadow Place Road and Corstorphine Road.

The man was pronounced dead at the Royal Infirmary of Edinburgh.

He hadn’t been named by police.

The property, which used to be a guest house, is home to three students and one young professional.

A woman at the detached home, who refused to be named, said the four flatmates had been woken by the incident.

She said: “We were downstairs. I didn’t go outside.  I didn’t want to see.”