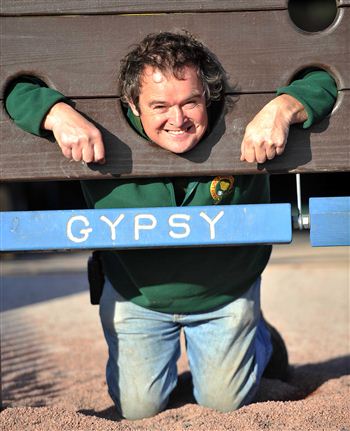 A CHILDREN’S play park is being forced to add signs to a medieval fortress giving a historical explanation of why gypsies used to be put in the stocks – after a member of the public took offence at one of its props.

Grant Bell, managing director of East Links Family Park in Dunbar, East Lothian, said he was amazed when he was contacted by police after an angered member of the public wrote to police after visiting the fortress, where kids can pose for a picture in the stocks with a criminal label of either “gypsy” or “thief”.

The complainer claimed the sign singled out a minority group, and was offensive to people who lived their life on the road.

Mr Bell, 47, said: “When the Sergeant phoned to say he was bringing the Chief Inspector down to look at the sign I was dumbfounded.

“I thought this is political correctness gone mad.

“I understand the police are under pressure to comply with EU laws nowadays, but I believe our sign is historically correct.

“Gypsy travellers did indeed used to be put in the stocks for their crimes, and it has been done for years in Disney films, so I don’t see what the problem is.

“When they called to say they were coming I honestly thought it was a wind up.”

He said he had feared he may have to remove the photo-taking facility, but instead the Chief Inspector recommended that he put signs up explaining the historical significance of the stocks and why people would have ended up there.

Mr Bell said: “At least the police weren’t too heavy handed about it, but to be honest young children are not going to understand the signs any way.

“I will definitely do it soon though, to clear up any future misunderstandings. 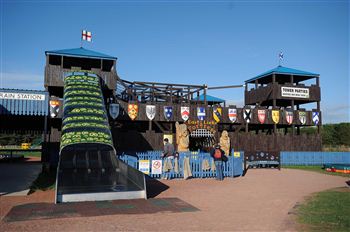 “I’m not sure who it was that complained, the officers wouldn’t tell me, but someone must have taken real offence to it if they’ve gone to the police about it.”

A Lothian and Borders Police spokesman said: “Following reports that a medieval stocks prop displayed a word that could potentially cause offence to the travelling community, Lothian and Borders police visited the East Links Family Park in Dunbar to discuss the issue with the owners.

“They accepted the wording may cause offence and agreed to place a historical educational board next to stocks depicting the plight and suffering members of the travelling community have endured over the years.

“Lothian and Borders Police are committed to working alongside partners and the public to build tolerance and understanding within our diverse communities and will provide assistance to the park’s management when drafting the content of their education board.”