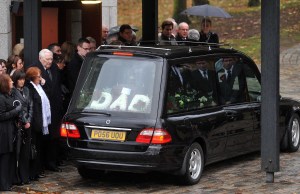 A FATHER-of-two who was found dead outside his pub was said to have “enough friends to fill a football stadium but not enough enemies to fill a phone box” at an emotional funeral today (Tue).

Steven Curran, 47, was discovered lying behind the Dolphin Inn at Whitecraig, East Lothian, at around 2am on Thursday 23 October.

A police investigation into his death concluded had been murdered.

Yesterday, it was the turn for emotional mourners to pack into Mortonhall Crematorium Main Chapel in Edinburgh to pay their respects to a man who was “taken too soon”.

There were no empty seats and many had to stand at the back and round the sides as the service began. Steven’s wife Jill and their two daughters Abbie, 13, and Lucy, six, brought a red rose to say goodbye to their beloved husband and dad.

The service was led by Minister Elspeth Clark who said that Steven had lived a full life and had many friends.

She added that the most important thing in his life was his family. 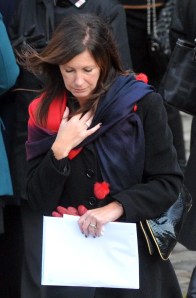 The coffin was brought in to a moving song with the lyrics “I love you”.

Wonderwall by Oasis was played which was said to have had a special significance to Steven and his daughter Abbie.

Brave little Lucy also said goodbye to her dad in front of all of his friends and family.

She said: “Me and Abbie will love you for as long as we live.”

He said: “Marrying Jill was the best thing you ever did and you often told me that.

“I will miss you.

“Now I’ll have an empty seat next to me at Tynecastle.

A poem was read by Ms Clark called ‘The Dash’ to show how much of a busy life Steven led.

She added: “Let’s treasure the memories that he has left behind instead of closing our eyes and wishing he was still here.”

Steven, known as Stevie to his close friends and family was the youngest of three.

He had three older sisters and was described by them as “mischievous and loving”.

Ms Clark said that the one thing he never truly got over was the death of his mum in 2007.

The Hearts anthem was played at the end of the service to show one of his greatest loves as he regularly went to games at Tynecastle to support his team.

A card from the service read: “Tragically taken from his family on 21st October 2010. Stevie was a devoted husband to Jill, beloved dad to Abbie, 13, and Lucy, six, son of Fred and the late Sheila and beloved only brother of Kathleen, Evelyn and Sheila.

“Steve there is a huge part of our life gone, you will be sorely misses.”

A wake was to be held at Liberton Golf Club in Edinburgh.

A huge police investigation swung into place following the discovery of the publican’s death.

A local man has since been charged with the murder.

Lee McNamara, 23, appeared on petition at Haddington Sheriff Court and is also charged with the theft of a car.