SCOTLAND’s first family – The Broons – are set to challenge Susan Boyle for the coveted Christmas number one spot with the release of their very first album. 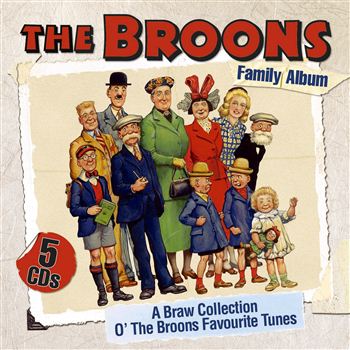 The compilation CD named The Broons Family Album: A Braw Collection O’ The Broons Favourite Tunes was released a week ago and has already rocketed into the UK charts coming inside the top 30.

The iconic comic strip family from Glebe Street, who first appeared in the Sunday Post as far back as 1936, have the support of Beatles record label EMI.

And insiders are widely predicting The Broons will be locked in a full scale “battle” with Susan Boyle the week before Christmas for the number one spot in Scotland.

In some record stores it is already the number one compilation album.

A spokesperson for HMV in Dundee said: “Broons are the third biggest seller in the store for the week only being outsold by Susan Boyle and Bon Jovi.”

The album contains five CD’s with a mix of music mostly hailing from the sixties.

The favourite tracks of Maw, Paw, Granpaw, Hen, Daphne, Joe, Maggie, Horace, The Twins and The Bairn are all included ranging from movie and TV themes as well as pop songs and Hogmany classics.

‘Dr Finlay’s Casebook’ and ‘Singin in the Rain’ sit quite happily alongside ‘Lets Twist Again’ and ‘Scottish Soldier’.

Gordon Campbell, Scottish consultant for BMI, said: “The album is aimed at people who grew up with the Broons. It has a very unusual track listing.

“It just felt like the right time to release the CD.

“The Broons are an iconic Scottish comic strip family. A lot of thought has went into what the tracks should be.

“The album seems to have struck a nerve with people who have grown up with the Broons.

“It’s really exciting and its one of these things that if takes off in Britain then there is no reason that it can’t take off in other countries too.”

The 129-track-album is being bought by all ages including many people in their twenties and thirties.

As an extra bonus the artwork on the cover and in the booklet will be the work of original artist Dudley B Watkins.

Take control of your EMIs: Tips for EMI management

Gamu given good odds for Christmas number one