An investigation is underway after fire crews had to cut a woman free after her Kia car was in collision with a lorry on the outskirts of Edinburgh today (Monday).

Lothian and Borders Fire and Rescue crews used hydraulic machinery to cut the roof and one side of the woman’s vehicle off to free the driver. 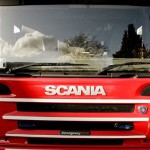 Her car collided with an articulated lorry between the Maybury Junction and the Gogar roundabout, to the west of Edinburgh shortly before 10.30am.

Once freed the woman, thought to be in her 50s, was taken by ambulance to the Royal Infirmary of Edinburgh, suffering suspected spinal injuries.

A police spokesperson said: “The car and lorry were travelling side by side at the time.

“The circumstances surrounding the accident itself are not entirely clear at this point in time but an investigation is underway.

He added: “It is understood that the woman was not seriously injured and she was taken to hospital as a precaution.”