The first bottles of Glenmorangie Original and Ardbeg Ten Years Old have gone down the line at their new state-of-the-art, multi-million-pound production and office facility based in West Lothian.

It marks the end result of a multi-million pound two-year investment programme, which has seen Glenmorangie refocus on its two core premium single malt Scotch whisky brands, with a view to worldwide expansion. 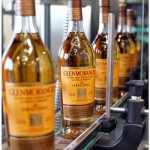 The new site – at the Alba Business Park in Livingston – includes environmentally friendly technologies in its new buildings which allow for efficient use of energy and water including rainwater harvesting.

The Company also employed an ecologist in the design of the landscaping surrounding the centre to preserve and enhance the ecological value of the site and its 12,000 square-metre, two-storey, purpose-built centre.

It features two bottling halls and has been designed with a special focus on high quality production and environmental efficienc, replacing its Broxburn bottling and cask warehousing site.

The firm has also moved its headquarters from Broxburn to central Edinburgh; increased distilling capacity and cask warehousing at its Glenmorangie Distillery in Tain, Ross-shire; and invested in enhancing the visitor experience at its Islay distillery, the home of Ardbeg.

The moves were in part to meet the future demand for Glenmorangie and Ardbeg in growing markets such as Asia, Continental Europe and the USA.

Chief Executive Paul Neep said: “These are exciting times for The Glenmorangie Company. Alongside our new facilities, we are also investing to develop Glenmorangie and Ardbeg in its key markets across the world.”

Operations Director Peter Nelson said: “This state of the art technology heralds a dynamic future for The Glenmorangie Company and our brands. This is wonderful news for our malt whisky lovers around the world who can be sure of the supply of their favourite dram for many years to come.”