A TRAINSPOTTING fan is to be immortalised in Irvine Welsh’s new book Skagboys thanks to an un-surnamed character from the original novel. 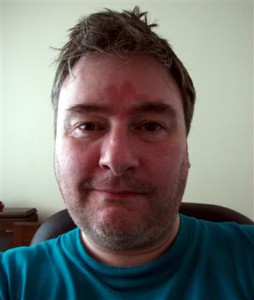 Stephen Hutchison, 43, an NHS worker from Shropshire will be named in the sequel after winning a competition to celebrate the 10th anniversary of Edinburgh based charity, Scottish Love in Action (SLA).

Scottish born Stephen will join Renton and the gang as lead singer of band, Shaved Nun, as the book goes back in time to their days before Trainspotting.

He will retrospectively adopt the persona of the unsurnamed character Stevie in the Victory on New Year’s Day chapter from the original Trainspotting book.

Mr Hutchison said: “I know when I entered the competition I didn’t think I would win it but I am thrilled to be included in Skagboys.

“When you enter a competition you never think that you are going to win. I was shocked when I received the phone call.

“I think what attracted me to the competition was because I used to live in Edinburgh, I used to hang out and live in Leith.

“I have been a fan of Irvine Welsh’s novels for many years, and knowing that all of the competition proceeds have gone to a fantastic cause is that little bit extra special.”

The competition had nearly 1,000 entries, with all proceeds going to SLA, a charity that runs projects in the south east Indian state of Andra Pradesh, caring for nearly 600 once destitute children in Homes-cum-Schools.

Mr Hutchison also thinks that it is great what Irvine Welsh has done to help the charity.

He said: “It is interesting what Irvine Welsh has done. I actually admire him for that and for what he has done to highlight SLA.

“Through the competition I have learned about the charity.

“I do believe that it is a worthwhile cause. Sometimes it takes things like the Irvine Welsh competition to raise awareness.

“I think sometimes that a charity has to do something unorthodox to let people know about what they are doing.

“It is nice that I have won but it’s not about me, it’s about the charity first. Anyone could have won the competition.”

Mr Hutchison has also revealed that he is not worried about what his character may get up to in the book set to be released in April 2012.

He said: “I am a very open minded person.

“When I read the book I will recognise that it is my name but other people won’t know that it’s me.

“I have a feeling it will probably be a punk rock band but I do like punk music so that’s not a problem for me.

“It is a piece of fiction. I am looking forward to reading it.

The charity has given me a very unique experience. The only other way you could replicate this is if you know an author or if you are an author yourself.

“It probably won’t hit me until the book comes out.”