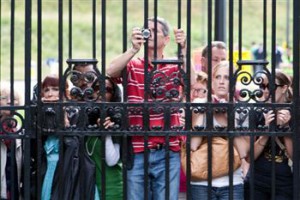 BRITAIN’S shoppers are set to be bombarded with a flood of royal tat as a huge range of ‘Kate and William’ memorabilia arrives in stores and on websites.

Tea towels, mouse mats and mugs have all been put up for sale on online-auction site E-bay, in a craze similar to when Prince Charles and Lady Diana announced their nuptials in 1981.

The items started filling the website on Tuesday after it was revealed that Prince William had proposed to his long term on-off girlfriend Kate Middleton.

The pair met whilst studying at the University of St Andrews.

Those who are keen can buy their very own williamandkate.tv website domain, which has a ‘buy it now price’ of £2,000.

E-bay is also selling a lucky sixpence with grandmother-of-the-groom Queen Elizabeth’s face on one side.

Aynsley China, a souvenir-making company in Stoke-on-Trent, has started production on a line of bone china pieces, with the first expected to arrive in shops early next year.

John Wallis, sales director, said: “We have had the designs prepared for some time but were just waiting for an announcement.

“We’ll be making items to commemorate both the engagement and the wedding.”

In 2006, Woolworths announced a similar range, only to have to scrap it when the couple temporarily broke up, but Aynsley waited until the engagement was made official.

And supermarket Asda has already produced thousands of mugs which were shipped out to stores on Tuesday evening.

A spokeswoman said: “Nothing says congratulations like your face on a mug – we hope the happy couple like the pictures that we have chosen.”

With a date for the royal wedding yet to be decided, retailers are holding-off with wedding memorabilia and concentrating on engagement items.

In 2005, the wedding of Charles and Camilla was postponed by one day to due to the funeral of Pope John Paul II.

The last-minute change meant souvenirs carried the wrong date, with manufacturers out of time to produce replacements.

The Royal Mint has also admitted it will be releasing a coin to commemorate the event.

Experts believe the wedding could boost the British economy by £620 million.

Neil Saunders, consulting director of retail researchers Verdict, said: “It’s hard to put an estimate on what benefit the royal engagement and subsequent wedding will bring to retailers but we believe in merchandise sales alone the engagement could be worth between £12 million and £18 million.

“Although times have changed since the last big royal engagement of Prince Charles and Lady Diana, many people will still be keen to buy some form of keepsake or memento and retailers will rush to capitalise on the merchandising opportunities.

“We think wedding-related merchandise sales could easily top £26 million in the UK, while food and grocery retailers could cash in to the tune of £360 million as consumers buy extra treats to celebrate the occasion as well as champagne and wine to toast the happy couple.

“All of this is before the benefits of travel and tourism are factored in; these could well add an estimated additional £216 million benefit.

“In total that means we are looking at a £620 million consumer spending boost.

“While that may sound like a lot, it should be remembered that this is a potentially massive event which will command not just the attention of Britons, but potentially most of the world.”