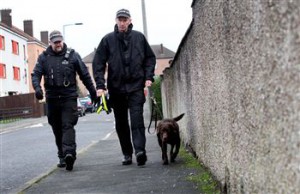 POLICE have raided around 100 properties in an Edinburgh housing estate after a tip off that drugs and firearms had been stashed in a garden.

Around 50 uniformed officers were deployed in the Broomhouse area from 9am – spending the bulk of the day carrying out searches.

The operation – which they said was “intelligence based” – was sprung when black clad officers set up a “controlled” area behind a cordon, zeroing in on addresses in the Broomhouse Loan and Broomhouse Square areas.

Senior officers said they were acting on a tip off that firearms were hidden in a garden – but said no trace was found despite specialist search teams combing the grounds by the time dark began to fall.

By mid afternoon, five arrests had been made and £1500 of unspecified drugs seized.

However officers later said that the arrests and seizures were unrelated to their original intelligence.

Chief Inspector Kevin Greig said the Lothian and Borders force was deliberately letting the criminals know that police were prepared to deploy in such numbers and target organised crime groups.

He said: “The planning on the lead-up to the searches was kept completely confidential until we were on the ground.

“But we have set up a police cordon which gives us complete control of the area and we can see who is coming and going. 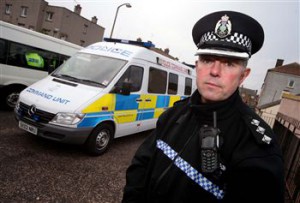 “It is important to let members of organised crime gangs know that this is the type of thing we are doing, and although they can probably see us on-site, it does not mean they have the power.

“We have already seized about £1,500 worth of drugs and have detained five people, which did not come as a result of the intelligence investigation, but just because we were in the area.”

Leaflets were handed to locals explaining why the raids were happening.

Chief Inspector Greig added people living in the community had been very welcoming and many had even given the police permission to search their properties.

He said: “We have not searched many residential properties, we have two sniffer dogs out and have been combing through the gardens around the area.

“Many of the properties are flats which have communal staircases and refuse areas, which are where we believe we should be concentrating our efforts.

“This type of action lets the public see the types of things we are doing to try and tackle serious organised crime which can often have a corrosive effect on the lives of people living around them.

“We have had a very positive response.”

He said that the investigation had not cost any extra public money.

The Chief Inspector said: “None of these officers had to have their shift patterns changed, they would all have been working anyway.

“We made the decision to prioritise their efforts in this area.”

The officers searched around 100 gardens and shared areas within the Broomhouse Estate.

Tonight a police spokesperson said: “We are acting on information that there may be firearms hidden within a garden in the area.

“Today’s activity should serve as a war 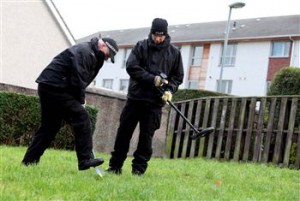 ning to criminals across Edinburgh that we will actively pursue them wherever they are based.

“Serious and organised criminal groups often use local communities as cover for their activities and cause misery of the majority of decent law-abiding people who live there.

“Dismantling these groups is a priority for Lothian and Borders Police, and if we receive information that can help us disrupt their activities then rest assured we will take the necessary action required.”